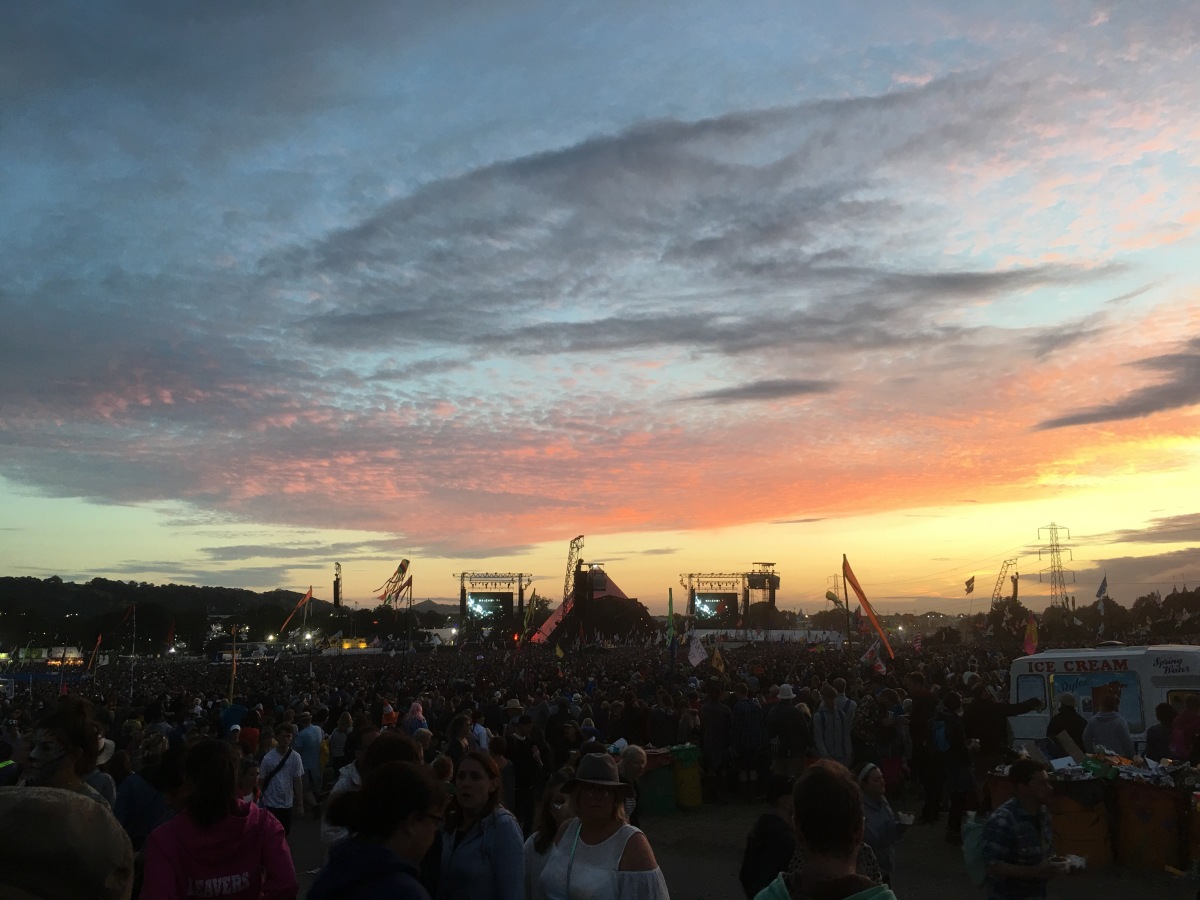 I am battered, exhausted, grotty, but yet still absolutely on top of the world that I was lucky enough to be at Glastonbury Festival 2017.

For anyone attending in their 30s, especially those in a stable relationship, there comes a time when going to these festivals with your friends becomes an increasingly reflective time. Specifically, there is an impending thought that this could well have been my last attendance for a while. The festival won’t be held next year, whilst there is a rumour circulating that the subsequent one will be held away from the site. That takes us to 2020 before the next one. Who knows where I will be by then, and who knows where my friends will be too. 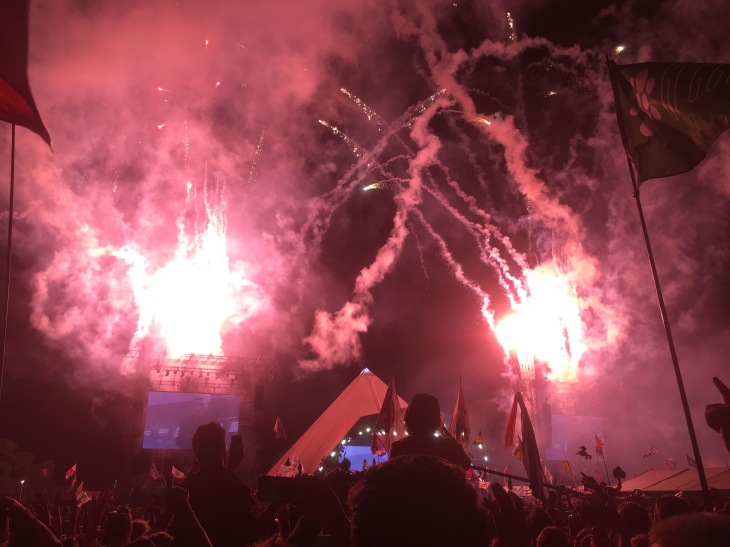 As a result, I was determined to make the most out of it and pack as much in as possible whilst not destroying my body.

I wrote about each of the days in posts at the end of each day, which can be found below:

I also posted short reviews of three acts I enjoyed that coincided with a bit of time to make notes:

Other highlights included a trip around the circus and theatre field (who knew man could juggle five ping pong balls without using hands or feet?), a Pilton Palais for some cinematic refuge, some fantastic food, the world’s smallest nightclub and endless other bizarre surprises I saw whilst walking around.

The most important thing is to make sure you spend it with close friend and family. I had a great bunch with me this year and managed to meet up with some friends I’d lost touch with over the years. The magic of Glastonbury never ceases to amaze me. 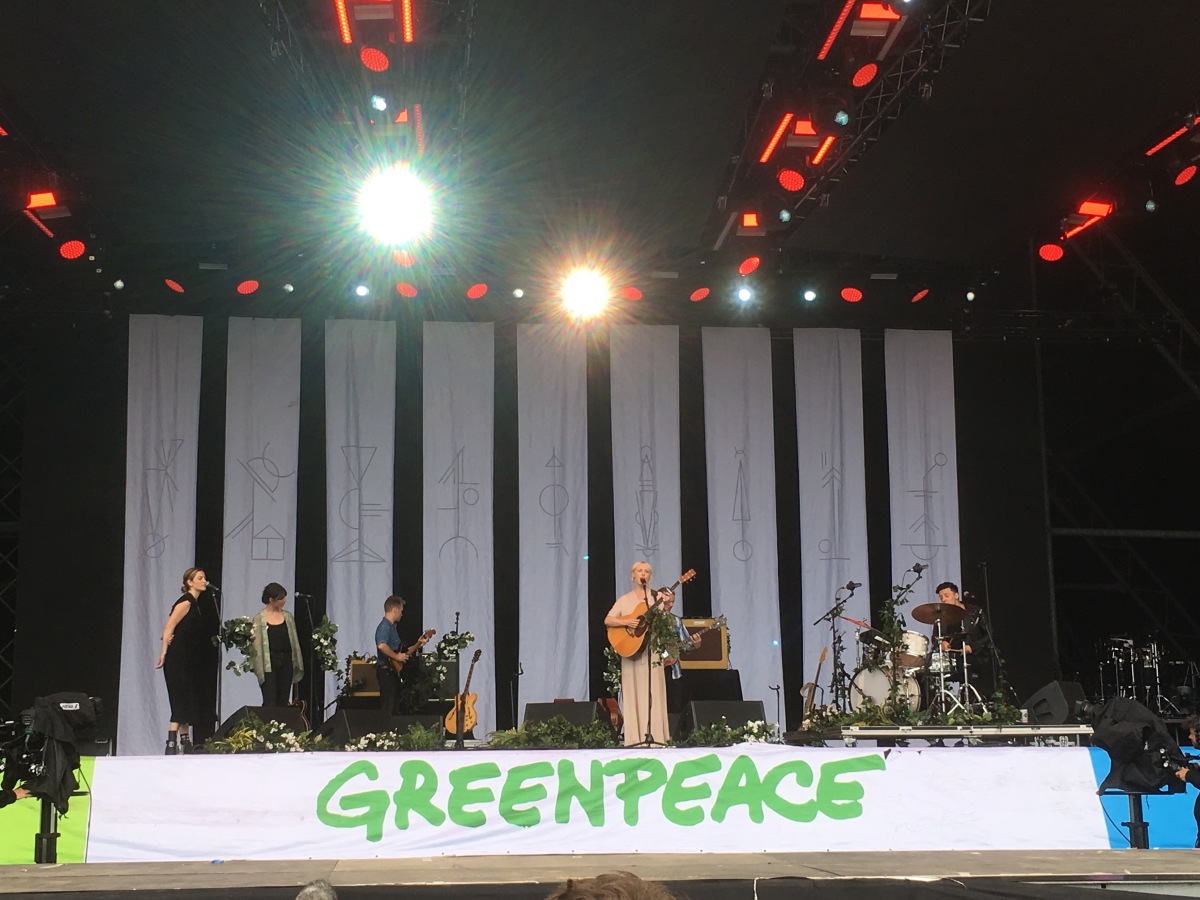 Setlist:
Soothing
Wild Fire
The Valley
Nothing, Not Nearly
Don’t Pass Me By
Sophia
Once
Salinas
Daisy
How Can I
I Speak Because I Can
Rambling Man

On a hazy afternoon at the Pyramid Stage, just before Barry Gibb kickstarted a night of partying for a crowd ready to go out in a blaze of glory, Laura Marling was providing a set equivalent of the quiet before the storm. It was a beautiful and understated performance that showed her abilities both as a songwriter and as a performer, with a subtle backing band providing a platform to allow her songs to soar.

The first and only time I had seen her previously was at the Hop Farm Festival in Kent in July 2008. Back then she’d just released her debut album ‘I Speak Because I Can‘, which was making waves at the time, and she wowed an audience who were there primarily there to watch Neil Young, Supergrass and My Morning Jacket. Not bad for an 18 year old.

Fast forward to 2017 and you can see a massive development in her as an artist. Her latest album, ‘Semper Femina‘, is a collection of songs exploring what it is to be a female. For me, music has to come from a position of passion and commitment to what is being said. For that very reason, Laura Marling absolutely one of the most authentic artists out there and the album rates in the top releases so far this year.

The new songs featured heavily in the setlist, making up five of the twelve tracks, including ‘Nothing, Not Nearly’ and set opener ‘Soothing’. But it was ‘Rambling Man’ from her debut album that stuck with me the most, with most of the crowd joining in for the famous refrain.

To those unaware of her work, she could be mistaken for being overly indebted to Joni Mitchell. This is wholly untrue and inaccurate. Marling is an artist in her own right and has been prolific and consistently excellent for a decade now.

Long may it continue.

[Note] When Marling introduced Daisy, she mentioned a friend of hers called Daisy May-Hudson who last year directed a film called ‘Halfway’, a film about homeless housing struggles. I had never heard of it but I’ve located a trailer for it online here and if I can locate it online I’ll make sure I watch it

The fifth and final day at the festival had been and gone. I am a beaten man, but it was worth it.

My first port of call for music for the day was to catch Jamie Cullum on the Pyramid Stage as he did the lunchtime slot. Nobody can deny he gives all his energy into his performances, and he has plenty of it. He’s an extremely talented man, and performed a mixture of covers and originals with his tightly-rehearsed group. Amongst the covers was a jazzed-up Ed Sheeran number.

I moved in close to the front the see Laura Marling, who captivated the audience with her unique country-folk hybrid styles. It’s hard to deny being reminded of Joni Mitchell as she pairs a voice that borders on yodelling with the most intricate of guitar work. Her final song ‘Rambling Man’ was simply beautiful.

Barry Gibb was next on the main stage, with the traditional Sunday afternoon legends slot. I definitely “got into” the set, and there is plenty of evidence of me singing along on the live broadcast. Fair play to him for donning the golf jacket for the end of the set.

The disco bar was raised another level when Chic took to the stage. From a hit-packed set my absolute highlight was ‘Let’s Dance’, which blew my mind. Singing that at full volume with 100,000 other fans is a truly special moment.

I had to swim against the tide to get to Goldfrapp at the John Peel Stage. Clearly some bad planning going on as the Chic-then-Goldfrapp option was appealing to many and at the same time Killers-then-Biffy was equally appealing. Cue pandemonium on the walkway between the two. Goldfrapp’ set was slightly delayed but once they kicked off they were as glorious as I expected them to be. Singer Alison Goldfrapp commands the stage like no other and there wasn’t a still waist in the tent. Their new album ‘Silver Eye’ had a good run out, with ‘Systematic’ being my particular favourite.

I caught the end of the Biffy Clyro set, with Matt Carole cover ‘When We Collide’ going down a treat [1].

The main headliner, Ed Sheeran, was an act I wasn’t particularly fussed about seeing when the day started. In lieu of there being no other appealing headliners we stuck with him and I can heartily say it was the biggest positive surprise of the weekend. This is a 26-year-old man and he has gone out on the main stage and powered through a set full of hits to an eager crowd. ‘Castle on the Hill’, ‘A Team’, ‘Shape of You’ and ‘Thinking Out Loud’ are undoubtedly songs of the highest quality and nobody can deny he has an extremely powerful voice. A talented man, full of confidence and charisma. Absolute quality.

A quick look around Cineramageddon as the 1970 Mick Jagger film Performance began to play and we saw a close to our festival. I can safely say that nobody had the exact experience I had – everyone’s pathway through the biggest party in the world is completely unique and wonderful. It’s exhausting, it’s exhilarating and it’s something I never want to end.

Thank you Michael and Emily. Until next time.