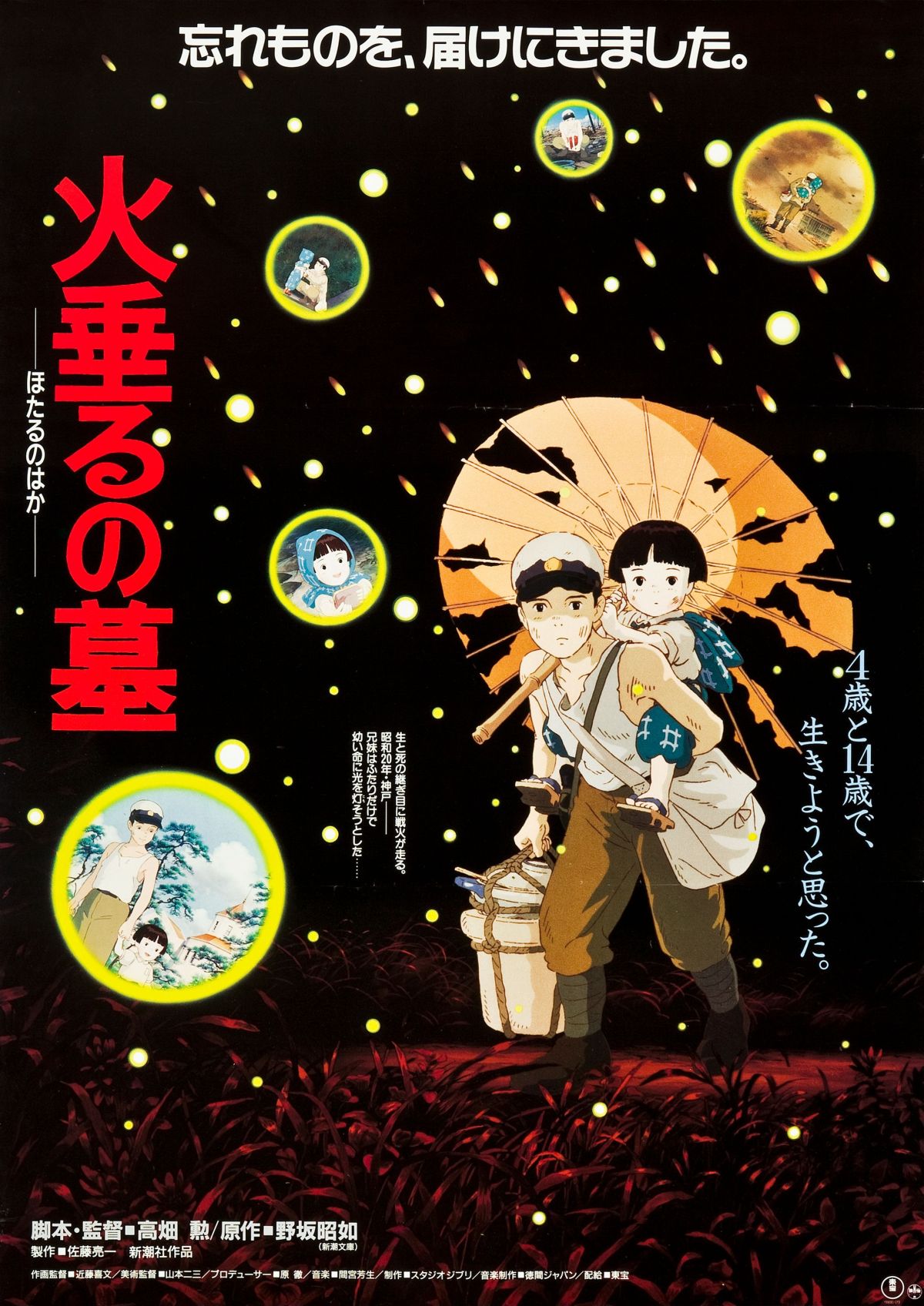 To be fair to Isao Takahata, writer and director of Grave of the Fireflies, he doesn’t pretend he’ll be delivering a happy-go-lucky lighthearted anime to the audience. The title hardly screams cute, the poster smacks of grimness. Then there’s the opening scene, in which the voiceover declares that he dies.

The film tells the story of two children – Seita (Tsutomo Tatsumi) and Setsuko (Ayano Shiraisha) – who are struggling to stay alive in the final few months of World War II. Their mother has died in an American air raid and their father is a captain in the Imperial Japanese Navy, meaning they have to stay with their unsympathetic aunt. However, with the continued threat of airstrikes and a growing unease with their situation, the pair decide to fend for themselves.

When discussing this film with anyone who has been lucky enough to see it, you will invariably get the same response. “Grave of the Fireflies?” Then comes the deep intake of breath. Then comes the deeper exhaled sigh. “Grim. Great film, but really depressing.” 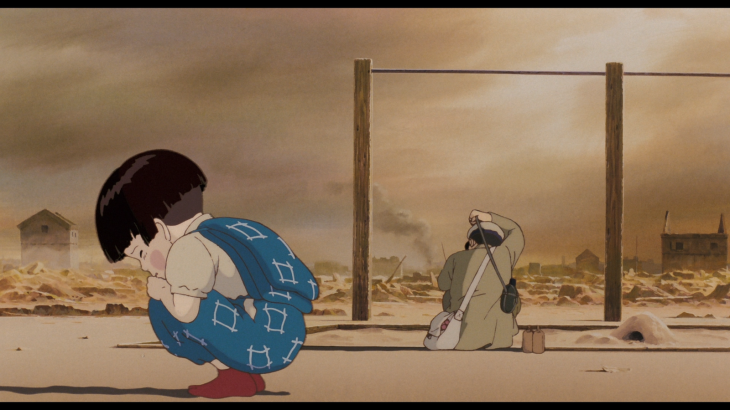 The film does not glamorise war in any way. It spends the entire running time delving into the relationship between the two siblings, the bond the war is creating and their resilience despite the tragedy surrounding them. The film gives an overwhelming sense of the individual impact of the war on the innocent people it affects. It doesn’t explicitly give a negative anti-war message, and it doesn’t attempt to portray the enemy (in this case the American Air Force) in a bad light. All these things are simply deduced by the fact that Setsuko and Seita’s story is so unbelievably sad.

The animation is absolutely stunning. It’s almost three decades since its release and its hard to think of a more realistic portrayal of Japan in animation. As the screenshot above shows, it is all greys and browns, though in this case Setsuko sits in the foreground in a blue ball attempting to protect herself of the reality of her mother’s fate. As Seita deals with it in his own way in the background, the effect is one of the most powerful images in the film. What else would two children do when their whole lives are turned upside down in such a catastrophic manner?

Since the release of this excellent film, Takahata has directed just four  more animated feature films, all of which were released with Studio Ghibli: Only Yesterday, Pom Poko, My Neighbours The Yamadas and The Tale of Princess Kaguya. Whilst all of these are excellent films, none quite have the same impact as Grave of the Fireflies, a film that has stuck with me since the first time I saw it over a decade ago. 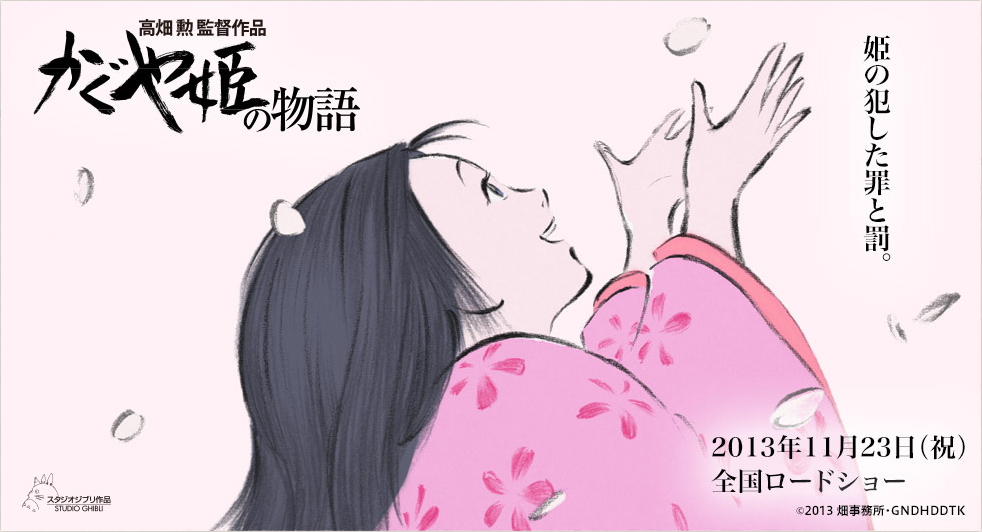 The Tale of Princess Kaguya is a faithful interpretation of the classic Japanese fable The Tale of the Bamboo Cutter, one of the oldest folklore tales in the history of the country. It is also Isao Takahata’s fifth film as director for Studio Ghibli, following the dark Grave of the Fireflies, the fun ecological adventure Pom Poko, the episodic comic strip interpretation My Neighbours the Yamadas and romantic drama Only Yesterday.

It tells the story of Princess Kaguya, a tiny girl found inside a stalk of bamboo by an aging bamboo cutter and his wife. She rapidly grows in size into a beautiful young lady, though she hides a secret for which she must, eventually, face the consequences.

The first thing that hits you when watching this film is the breathtaking quality of the animation techniques. Putting aside the great storyline, the film is worth watching just for the fact it is so beautiful to view. It really serves to remind us how effective 2D animation can be and we’re lucky that Studio Ghibli is yet to embrace 3D animation in the same way as Disney has, all but throwing away their heritage (though nontheless still churning out mostly excellent films).

My favourite scene involved the princess running away from her adopted home in panic and fear. At this point the art style subtly changed and became more expressive and less controlled, with darker greats and blacks filling the screen, and it was an intelligent way to channel her emotions into the visuals. 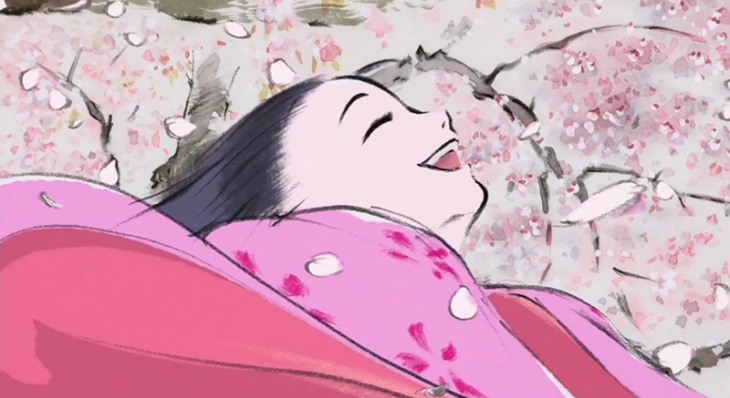 There is an immediacy of beauty in the animation style.

The film arrives in North America and Europe with a lot of endorsements, not least the nomination at this year’s Adademy Awards in the category of Best Animated Feature (it lost out to Big Hero 6). I usually prefer the Japanese voice-overs with subtitles and was lucky to find a screening with this option, but the English-language cast is nothing if not star-studded (including Chloë Grace Moretz, James Caan, Lucy Liu, Mary Steenburgen and Beau Bridges). I look forward to being able to hear this version once it reaches home media later this year.

At 137 minutes it might be too long for most children but if youre looking for an intelligent way to entertain your family this weekend I heartily recommend this film.

The Tale of Princess Kaguya is out now at selected cinemas across the UK.