‘Shirkers’ is a quite remarkable documentary film. Written and directed by Sandi Tan, it tells the story of a potentially groundbreaking film created in 1992 by a group of three teenage girls in Singapore, the reels of which went missing shortly after filming wrapped, disappearing along with the enigmatic director.

Tan was one of the three young aspiring filmmakers behind the film. Her interviews with fellow creators Jasmine Ng and Sophie Siddique, both interviewed here and clearly heartbroken over their loss, reveal a truly enthralling mystery surrounding the film.

The director, Georges Cardona, is a name unfamiliar to most. It is unlikely that he was the man that inspired James Spader’s character in ‘Sex, Lies and Videotapes’, but Cardona wouldn’t let that get in the way of a good story. The picture painted of him here is one of a man full of lies. It’s a man desperate to succeed himself and not let anyone else around him get anywhere without him. There’s also a hint of inappropriate behaviour here – why was a married 40-something-year-old man going on a road trip across the USA with an 18-year-old girl?

As it all unfolds, it’s obvious how frustrating it is for all those involved. This was an exciting passion project that was already picking up a bit of buzz around the industry, which never saw the light of day. Had it been released, it could have had a huge impact on the Singapore film industry and the lives of those behind it.

Sadly, all we can see is the soundless footage and a remorseful memory of three young friends that lost a part of their youth, along with their friendship itself (in a recent interview with Vulture, Tan stated that the Sundance premiere was the first time her, Jasmine and Sophie were all in the same room together in over twenty years). 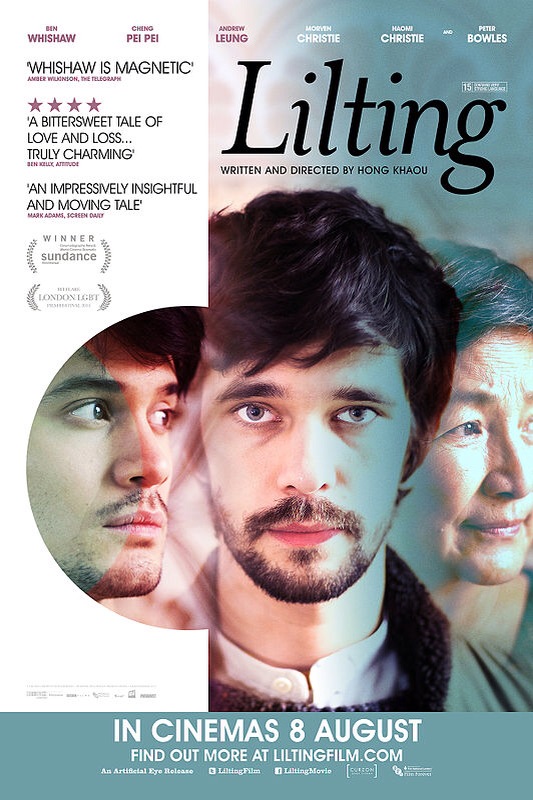 Hong Khaou’s Lilting is a film of understated power. Watching it is a deeply moving experience.

The plot deals with the unexpected death of a young man played by Kai, and the toll this takes on his lover Richard (played by Ben Whishaw) and his mother Junn (played by Cheng Pep-pei). The snag in the situation is that the mother is unaware that her son is homosexual, and the situation is made more complex by the fact that Richard intends to respect his lover’s wish to keep this secret whilst at the same time ensuring Junn is looked after, which raises issues that are extenuated by the fact they have no common language. Or rather, they don’t until Ben hires a translator, though this gives rise to as many issues as it resolves.

This is a complicated storyline to see through and could easily fall flat with poor performances. Junn is brilliantly stubborn and cold, though we can see a heartbroken woman underneath the façade. Whishaw’s turn is an absolute revelation and every quirk adds to the belief that he is completely ripped apart by the situation.

A large amount of praise also needs to be heaped on the unwillingness to shy away from the fact we are seeing a homosexual relationship. So many times in films we see same-sex relationships implied but rarely do we see the playful intimacies and passion of such a relationship. This isn’t to say that there are any gratuitous sex-scenes, but the story called for the young men to be very much in love and the closeness is not shirked. Hopefully this is something we will see more of in the future.

Lilting is one of the best films I’ve seen this year. It’s a stunning study of the emotions people go through when someone they are close to dies with a secret, and the difficult resolutions they find to deal with the loss. If you get a chance to see it, then grasp it with both hands.

Lilting is out now in selected cinemas across the UK, and will be released in the USA on 26th September 2014.