Whilst Studio Ghibli has been a powerhouse of cinema in the East for many decades – since being born of the release of 風の谷のナウシカ / Nausicaä of the Valley of the Sea in 1984 – many Western cinema-goers weren’t introduced to the wonders of the animation house until 2003. This was the year that Spirited Away reached the wider audiences after being nominated and winning the Academy Award for Best Animated Feature.

Those whose interest was peaked enough were rewarded with a fantastic picture realised in beautiful 2D traditional animation. Its use magically imaginative turns that seemed uniquely Eastern mesmerised the audiences, allowing its popularity to grow through word of mouth and causing a renewed interest in the studio’s back catalogue.

The story itself follows ten-year-old girl Chihiro who is moving house to a new and unfamiliar location with her parents (a familiar opening gambit in a Ghibli picture). Accidentally stumbling upon an abandoned amusement park, her mother and father greedily consume some mysterious but luxurious food whilst Chihiro investigates the surroundings. By the time she returns, her parents have turned into pigs and she cannot escape, forcing her to go deeper into the mysterious world to try to work out how to turn her parents back to humans and allow her life to return to normality. 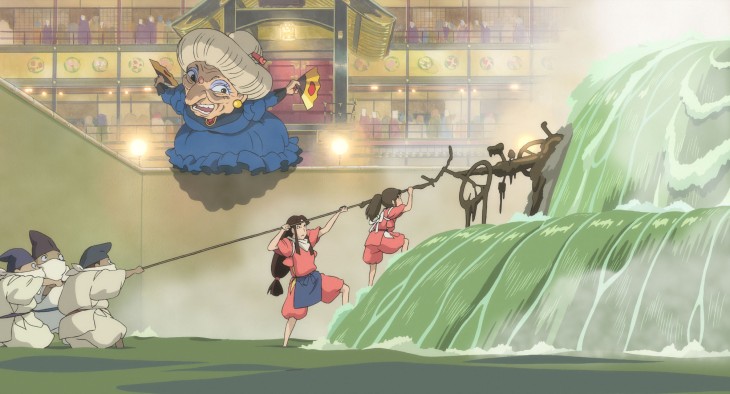 In its most basic form, it is a coming of age tale akin to Alice in Wonderland, with a setting that is just as supernatural as the western equivalent. She is forced to find her identity as an adult after having her childhood identity removed from her – including her name – and only by doing so can she bring back her parents.

Whether this means the film is set in a supernatural world, or the middle portion of the film is simply a figment of her imagination is open to debate. Certainly the possibility is there that she has slipped into a dream and this is a manifestation of her fears and resistance to growing up. However, Miyazaki clearly decided to show that Zeniba’s hair band was still in her hair after her return to the “normal” world, a move to clearly show this wasn’t a dream at all. A subtle but sweet reveal.

It was a reminder of how to do it properly. Disney was yet to move away from traditional animation in favour of the 3D animation being celebrated by the likes of Pixar and Dreamworks, instead releasing both Lilo and Stitch and Treasure Planet in the year this reached western cinemas.

In contrast, Studio Ghibli wasn’t afraid to aim squarely at a more adult audience, and hadn’t been for years. Spirited Away was just the tip of the iceberg – representative of a rich body of work but standing out as one of their greatest achievements.