The second of two films I saw at this year’s BFI Flare Festival, Dear White People is an American satirical comedy set on Ivy League Winchester University campus. It centres around several students who attend the predominantly white university, in particular: Sam White (Tessa Thompson), a sharp-tongued mixed-race film production major who runs a popular campus radio show called Dear White People, which challenges the university policies and mind-sets of both the school administration and the students in a humorous but cutting manner; Lionel Higgins (Tyler James Williams), a homosexual black student struggling to fit in and find his voice as an aspiring journalist; Coco Conners (Teyonah Parris), a black student who is secretly trying to land a role on a reality TV show set around campus, whilst simultaneously trying to garner fame through her video blog; Troy Fairbanks (Brandon P Bell), Sam’s ex-boyfriend and current school head of Armstrong/Parker, the all-black house on campus; Kurt (Kyle Gallner), a white student and son of the school’s president, who organises a controversial Hallowe’en party with a blackface theme in response to Sam’s outspoken radio show; and Gabe (Juston Dobies), Sam’s white boyfriend. 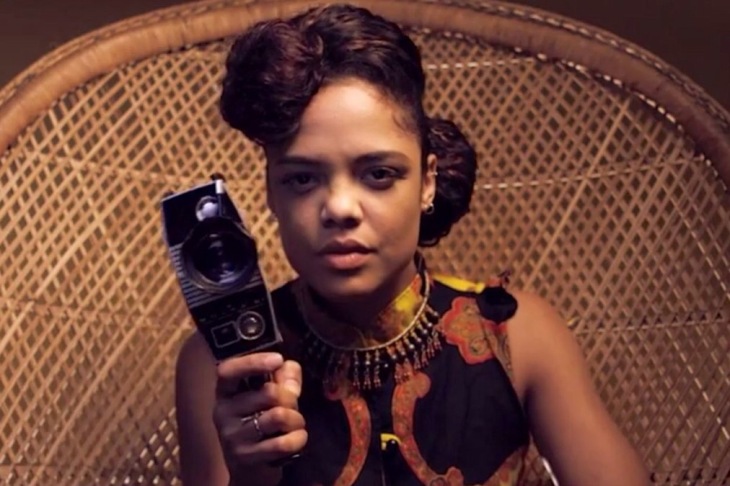 Tessa Thompson is a revelation in her performance as Sam White.

I was lucky to see this film. It was the subject of an online petition to raise awareness of the film and increase the pitiful number of screenings it received last year in the UK – just two at the BFI London Film Festival. These Flare screenings were again over-subscribed, which begs the question – why hasn’t it received a wider release? Perhaps it’s the fact it deals with some pretty hard-hitting issues whilst not losing its ability to entertain. Maybe the questions posed were deemed as too sensitive for a large distributor to pick it up. Either way, it’s a massive shame. This is a film that needs to be seen, not just because of its important content but also because it’s a fantastic and hilarious film.

Praise is due for both Tyler James Williams and Tessa Thompson. The former, fresh from his recent role in The Walking Dead as Noah puts in an assured performance as someone who himself isn’t very self-assured for most of the film. However, I’m surprised he is the cover-star of the film as, for me, the central storyline and most interesting character was Sam White. Tess Thompson (recently of Selma) is a revelation in this role, playing the angry student to perfection. It’s a character with some important opinions and without her it would have risked being just a good campus comedy, but without the hard-hitting message. When the cracks in her prickly character reveal her fragility, the results are astounding. As a character, Sam galvanises the same provocative thoughts in the students within the film as it does the viewers of the film, and there aren’t many teen-comedy characters in recent years that I remember asking such important questions of the viewer. Frankly, the performance is a revelation. 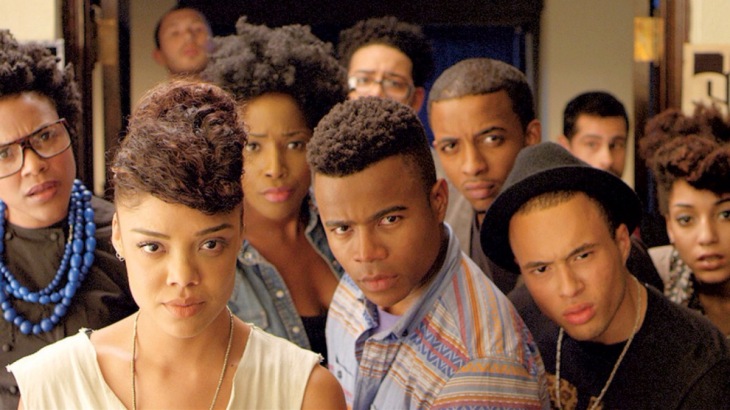 The excellent acting performances reach throughout the large cast.

Elsewhere, I felt the tones and cinematography added a lot to Simien’s well crafted script and impressive performances. Topher Osborn channeled elements of Wes Anderson in the beiges and attention to detail that are clearly evident in these well-composed shots.

If you get a chance to see this film, then I heartily recommend it. As a white heterosexual British man, I inevitably felt discomfort as I sat in the cinema being challenged to think about the questions posed by the film. In many ways that was the ultimate goal and it will be a shame if the wider cinema-going public doesn’t get to see this fantastic story.

Dear White People does not currently have a wide UK release date.