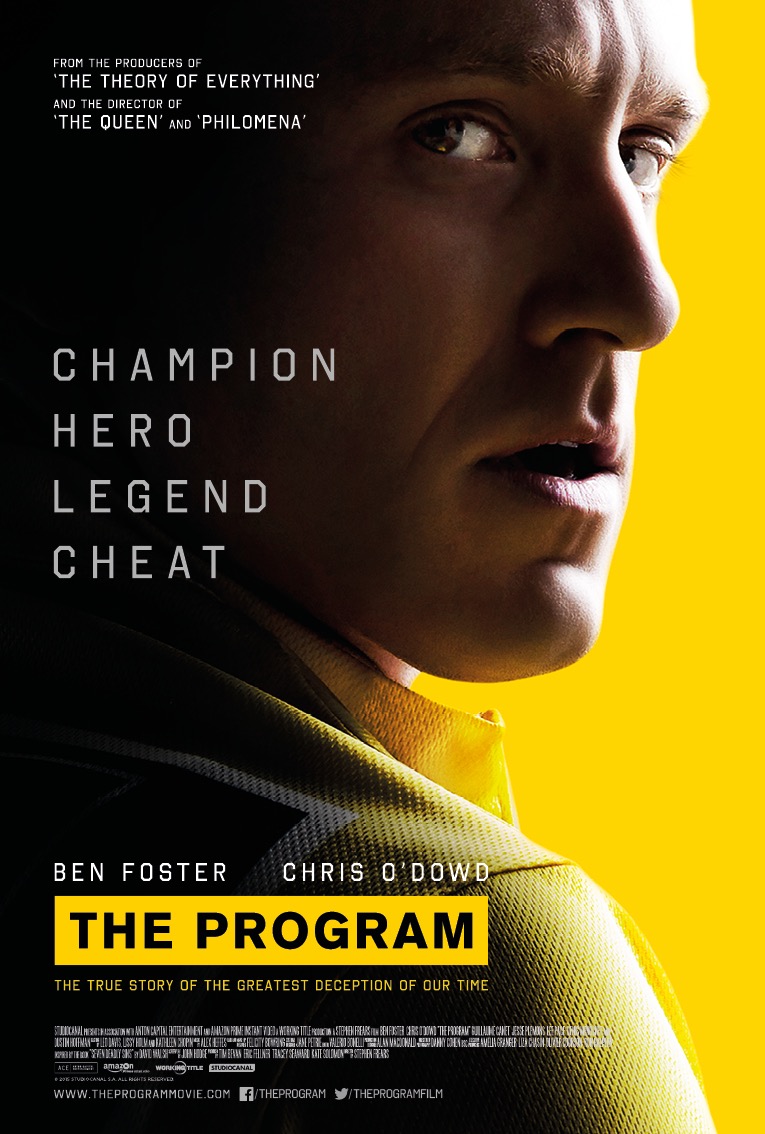 In the midst of the Lance Armstrong doping scandal, Sunday Times journalist David Walsh published his book Seven Deadly Sins. The sole purpose of the book was to blow the cover on Lance Armstrong and reveal the truth about the complex doping program he was involved with during his supremacy in cycling, specifically the Tour de France. Whilst Armstrong was banned for life from cycling in October 2012, two months prior to the release of the book, vindicating David Walsh and the contents of his book.

The Program re-tells this story, with Chris O’Dowd as David Walsh and Ben Foster as Lance Armstrong.

There are narrow margins in its portrayal of Armstrong. Frears gives a fair portrayal of the man, allowing room within the character to justify his actions. It doesn’t shy away from the fact he spearheaded this complex program of systematic doping, on a level so widespread that USADA (U.S. Anti-doping Agency) referred to it as “the most sophisticated, professionalized and successful doping program that sport has ever seen“. However, to fully represent him, it must also be shown that he used a significant amount of his own time alongside the money earned to aide cancer research. The Program just about lands perfectly in the middle without feeling like it is sitting on the fence, only tipping into an out-and-out negative portrayal when he loses sight of his goal to beat cancer and instead gets addicted to winning at all costs.

When a massive scandal such as this is at the forefront of the public eye, it is easy to forget how successful and inspiring Lance Armstong was for both cyclists and cancer sufferers. It must be remembered that Lance Armstrong started doping, like most cyclists, because he couldn’t win a race without it. In this version of events, he was driven by the fact that doping was already widespread in the sport when he first considered it. It doesn’t strike me that Spears was condoning his actions; he wasn’t the first, nor was he the last. He was simply the most successful.

In hindsight, it was a win-win-win situation for everyone involved. Lance Armstrong won medals and tournaments every season, cancer research programs gained a lot of money and the profile of the sport was raised due to the success story playing out in the public’s eye. The only real losers were the honest cyclists who were unable to compete on the same level.

In time, this film won’t prove to be the definitive biopic on this subject, but with the media pursuit of truth as the approach it offers a unique angle on the situation. One wonders whether its success wasn’t hindered somewhat by the similarly-themed Spotlight, which was busy on the festival circuit at the same time as this. Spotlight may have not been everyone’s favoured choice for the Best Picture Academy Award in January, but it was certainly a more powerful film than The Program.