If you’ve seen Toni Erdmann, you may be forgiven for leaving the cinema mightily confused. Not because the film was overly complicated, but perhaps because you’d watched a film drastically wide of what you’d been expecting. Marketed primarily as a German-Austrian slapstick comedy (schpalschtick? I’m coining it now), what audience have instead been challenged to watch is an affecting tragic drama that deals with a man’s disjointed relationship with his career-focussed daughter and tries to cultivate some kind of relationship amidst the complicated web of activity she has built around herself.

Toni Erdmann is the alter ego name of Winfried Conradi (played by Peter Simonischek), the father of Ines Conradi (Sandra Hüller). She is working as a business consultant in Bucharest, but returns to her hometown following the death of the family dog. When Winfried realises she is unduly stressed and taking a fake phone call in the back garden, he decides to follow her back to Bucharest and spy on her to find out more about her life. 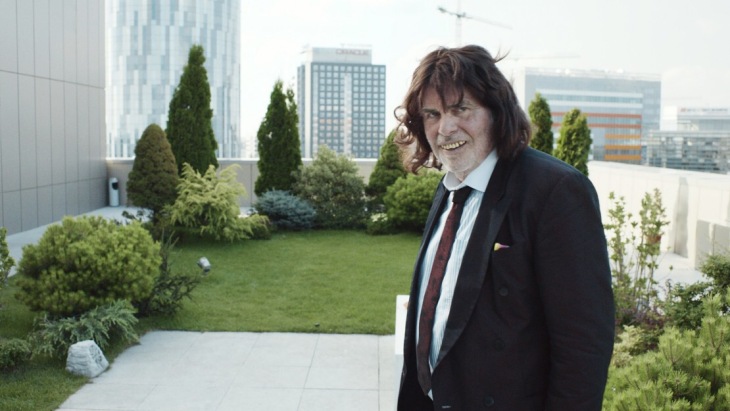 One of the main polarising aspects of the film is the relationship between the father and daughter. Depending on how you interpret it, you might see him as a terrible father who is undermining his daughter’s progress in her career. She is trying her hardest to be taken seriously in her role in the midst of some terrible sexism in her workplace, but he is treating her whole life as a joke and she is right to distance herself due to the feeling of resentment over his actions. One cringe-worthy encounter involves an important business meeting with an important contact Henneberg (Michael Wittenborn) at an evening drinks social, whereby she makes a serious suggestion on a business level, but instead is asked by the man to take his wife shopping, whilst Ines’s father – as the ridiculous titular Toni – is invited for more drinks. A frustrating scene that portrays the subtleties of sexism at their absolute worst.

However, if you side with the father and assume that he is a totally devoted father – or at least one regretting not being devoted in the past – then you can read it that he has seen his daughter struggling, depressed and stressed, and wants to help her realise that there is more to life than being stressed at work. When he sees his daughter being pushed around by her workmates and not being treated equally, then he realises he needs to step in and show her what she can’t see – that she’s wasting her time. 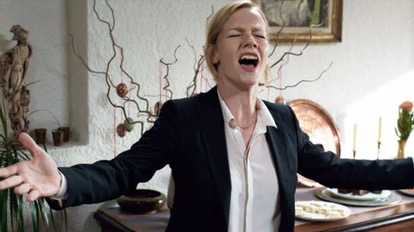 After contemplating the film for over a week, I’m still not entirely sure where I sit on this, though I’m leaning towards the latter.

There are moments of real comedy in the film, but they are often laced with tragedy serving to undercut any notion that this is a comedy. There is a memorable scene when she organises a birthday brunch, which is only organised because it offers an opportunity for work colleagues to socialise. However, when she gets stuck in her dress whilst getting ready, she decides to simply take the dress off and answer the door with no clothes on. Initially humorous, the ripples of laughter disintegrated as the audience in my screening realised that we were witnessing a woman having a breakdown.

It’s a truly intelligent film that refuses to provide any definitive interpretations on the situation, instead allowing the viewers to make up their own mind. Thought-provoking and well-executed – exactly what a film should be.