“No one told us. No one said you are going to lose both engines at a lower altitude than any jet in history.”

A defiantly memorable line from a triumphant film, delivered with all the finesse of one of the greatest living actors being directed by another. It is a coming together to be cherished, especially with results this good.

Clint Eastwood’s latest film has all the vigour of his heyday performances, despite the fact he has now reached the grand age of 86. Whilst many would have been thinking about retirement decades earlier – nobody would have blamed him for waving goodbye after what would have been a fitting farewell in 2009’s Gran Torino – he continues to surprise film lovers with yet more tremendous creative flourishes. In a year that has been tarnished by far too many deaths of icons of film, music, television and beyond, Sully is a much-welcomed gift from one of the greats. 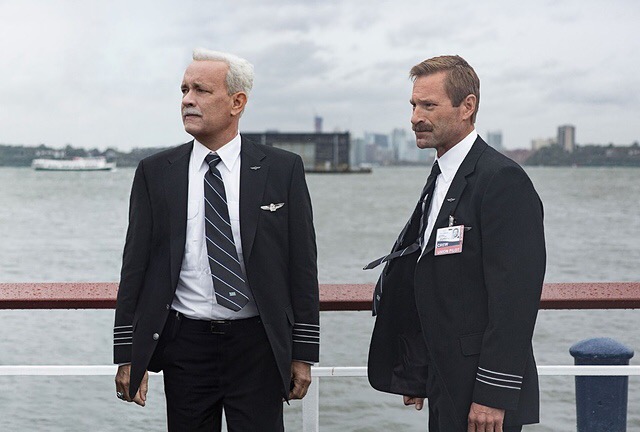 Hanks and Eckhart are in fine form

Tom Hanks is in fine form as the titular Chelsey “Sully” Sullenberger, a former US Air Force pilot turned passenger plane captain who literally bet 155 lives on his own instinct when a flock of Canada geese destroyed both engines of US Airline Flight 1549 as it departed from LaGuardia Airport. Sully’s instinct led him to successfully land the plane in the Hudson River. Heralded by the media, along with his copilot First Officer Jeffrey Skiles (Aaron Eckhart), as a hero, the National Transport Safety Bord (NTSB) weren’t as happy, opening up an investigation into what happened with a pre-determined plan to pin the damage to the aircraft on Sully due to pilot error, which would end his career. Their argument pivoted on the feasibility that the aircraft could have been landed at any of the nearby runways, the best option of which was nearby Teterboro Airport.

The film’s story plays out in a non-linear fashion, flitting between the aftermath of the landing and build up to the court hearing, Sully’s recollection of the incident (and bouts of post-traumatic stress) and some flashbacks to his pilot training in his youth.

There is little in the way of artistic licensing from Eastwood, largely sticking to a realistic and human story. Indeed, where it really makes an impact is that it never simplifies the technicalities of the aircraft or the arguments of either side for the benefit of those who aren’t paying attention. This is an intellectual film that respects its audience. The only worrying thing is that it felt so fresh – a matter that is simply indicative of the state of Hollywood in the present day.

This film may not make great waves at the box office as it battles out against Fantastic Beasts, Doctor Strange and Rogue One, but in years to come it will stand up alongside any of the films that Eastwood and Hanks have been involved with and will be seen as a work of art.