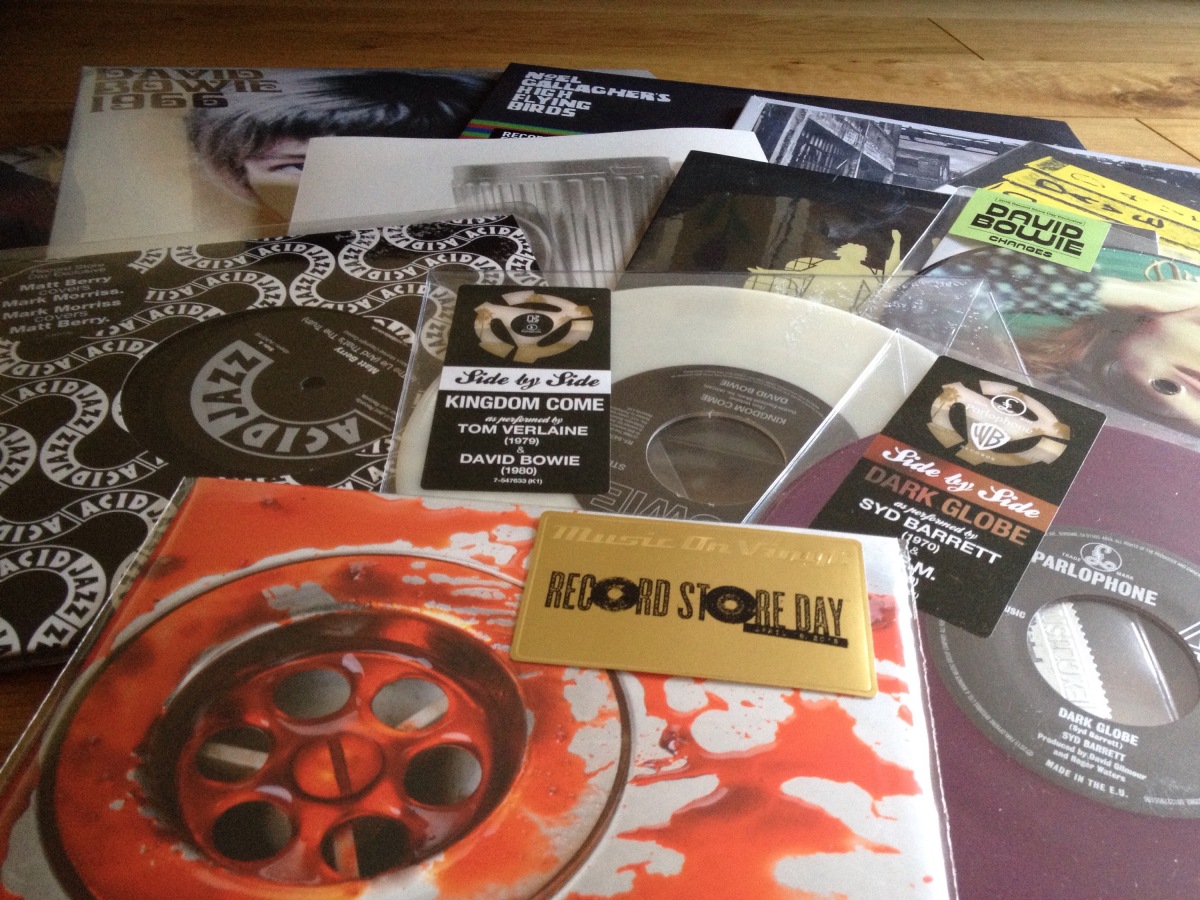 I’ve just got home from Nottingham after visiting Rough Trade for Record Store Day. It has become somewhat of a pilgrimage for my wife and I who do this every year and we always have a great day out with today being no exception. I have to say that Rough Trade has been the best experience I’ve ever had at a Record Store Day event, and the fun is still going on as I type. Get down there quick!

Supergrass – Sofa (of my Lethargy)
As I mentioned in my preview, top of the bill was a 7″ vinyl pressing of Supergrass track “Sofa (of my Lethargy)”. It was fantastic to hear that this was finally being released. A promotional CD had been sent around to radios ahead of the Mercury Music Prize on 12th September 1995, which was a couple of months after “Alright” (and “Time”, technically) had infested the charts and infected the subconscious of an entire nation. Previously the only way to hear the radio edit was to get hold of that promo CD or a copy of the Ten Albums of the Year promotional CD issued as a tie-in with the Mercury Music Prize that year. Finally, however, this release has seen the light of day and allows “Sofa…” to sit pretty with the rest of my Supergrass 7″ vinyl singles, in all its luscious green glory.

However, for the die-hard Supergrass fans out there, there is also a much more interesting track on the b-side. Titled “I Believe In Love”, it is an out-take from the “I Should Coco” sessions from 1995 and represents the first new Supergrass material to be released since the “Rebel In You” b-side “Car Crash” in 2008 (also a vinyl-exclusive). It’s a nice catchy summer tune with a memorable “Ba ba ba ba ba ba ba ba” chorus. It sits somewhere between early Supergrass and stuff most of the band had been producing as part of The Jennifers, though it doesn’t give any of the album tracks a run for their money. A nice track to hear and I’m sure it will see the light of day on a CD re-issue sooner or later.

Matt Berry / Mark Morriss – This Is The Lie (and That’s the Truth) / October Sun
I’m a huge fan of Mark Morriss, who has been working hard since the break up in 2011 of The Bluetones. One of his projects is playing rhythm guitar in Matt Berry and The Maypoles. Another is as a solo artist in his own right, most recently releasing the excellent 2013 album A Flash of Darkness. Combining these two elements, this Acid Jazz Records release (the home of both Mark and Matt) sees Mark cover Matt track “October Sun” as the AA-side, whilst the A-side is a version of “This Is The Lie (And That’s the Truth)” by Matt Berry. Both tracks are excellent and this item is a must have for fans of either, especially given that the songs contained aren’t available anywhere else. Keep an ear out for the new psychedelic ending to the A-side, which takes the song in a whole new direction.


One of many Side-by-Side releases this Record Store Day, this item sees the song “Dark Globe” performed by its original writer and performer Syd Barrett and what many consider the definitive version as performed by R.E.M. The latter originally included it as the b-side to “Orange Crush”, though it later reappeared on the b-side to one of their biggest hits “Everybody Hurts” after successfully being included as a regular on their touring setlist. I have to say, R.E.M. take the bare-bones of a song and turn it into something haunting, revealing layers that aren’t even evident in the original version. This is a nice artifact for fans of Pink Floyd and R.E.M. (of which there are many), but it’s also a really effective way to compare the two versions. It may seem a little more back-to-back than side-to-side, but somehow it works.

Graham Miller and Steve Shill – The Moomins Theme
A bit of an oddball release this one, but not so if you’re aware of the Finders Keepers record label. Whilst the label website provides a comprehensive overview of what they do there, it is essentially a label lovingly overseen by Andy Votel and Doug Shipton who dedicate a disproportionate amount of their time to seeking out obscure, rare and forgotten music from around the globe, with a heavy emphasis on soundtracks of (usually) unknown films. The results are more often than not astounding and I’ve never been disappointed with a release.

The item we get this Record Store Day is a debut release for The Moomins Theme as created by Graeme Miller and Steve Shill. It was a UK-specific release as they were hired to re-soundtrack the show ahead of it being brought to UK television screens in 1983. The contents of the vinyl are quirky but worth the attention that has already been afforded by those behind the release. The packaging alone is worth your money – a hand-stitched fuzzy felt sleeve in one of two designs (approximately 450 each). Snap it up before it disappears for another 32 years! 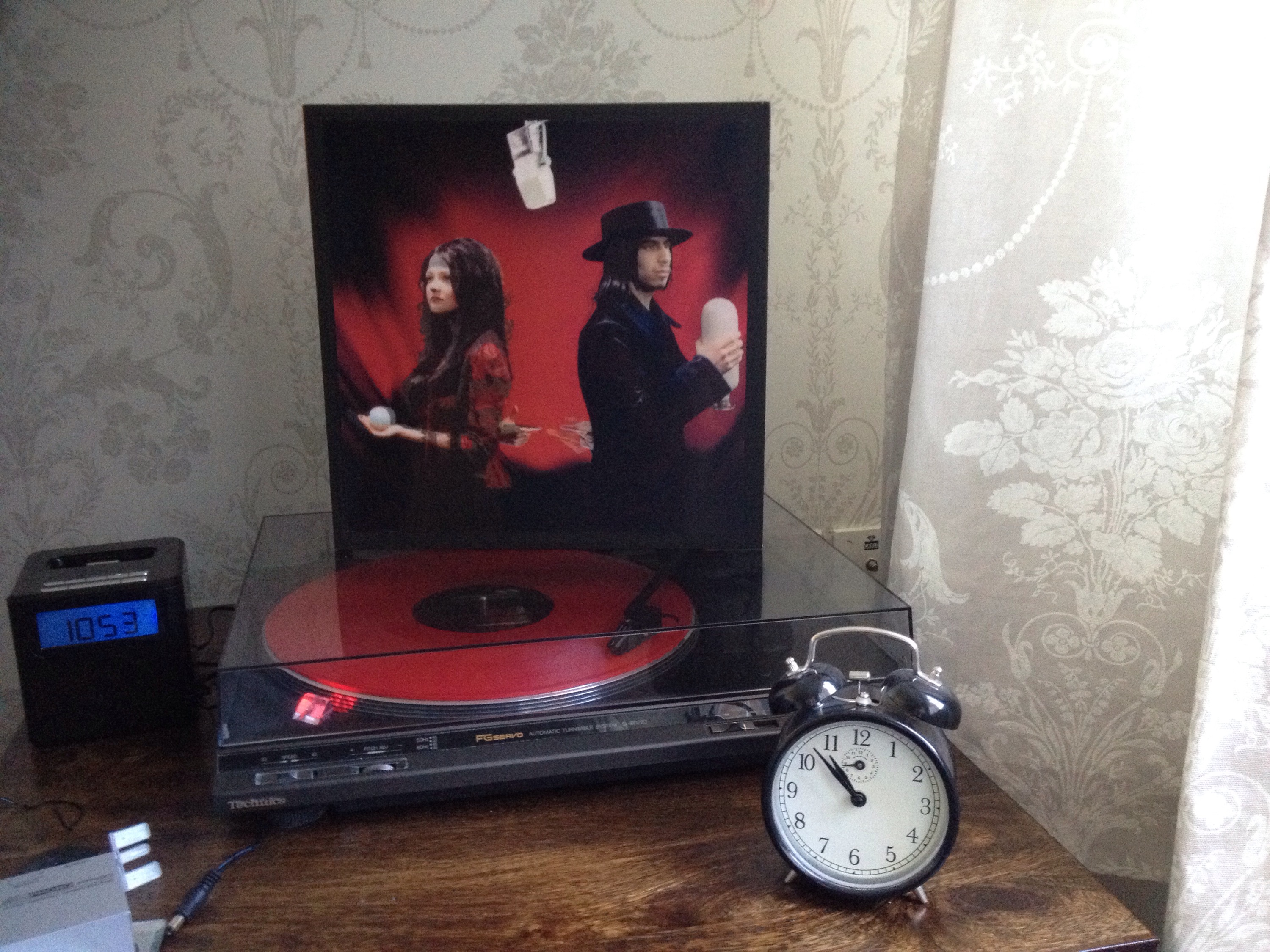 One of my favourite items from Record Store 2015

I was able to pick up three (THREE!) David Bowie releases, the nicest of which is probably the “Changes” picture disc. There was also a lovely Foo Fighters 10″ vinyl titled “Songs From The Laundry Room”, which features demos of two tracks from their debut eponymous release, plus a cover of Kim Wilde’s “Kids In America” and a new track “Empty Handed”. The White Stripes released “Get Behind Me Satan” on vinyl for the first time, which I was lucky enough to locate. Finally, I was extremely pleased to find the Silva Screens Records release of the Psycho orchestral themes, which is a beautiful piece for cinephiles like myself.

I missed out on Paul McCartney’s “The Family Way OST”, though I’m hoping to pick it up at a later date. One missed item from such a long list isn’t bad, even though I did have to set my alarm to 2am to guarantee my luck.

For those not in the know, Record Store Day is an annual event where independent record stores across the globe release a host of exclusive limited vinyl records with the intention of boosting the popularity of local independent record stores. It’s always a fantastic day where collectors and fans come together to get their hands on something special.

I’ll be down at Rough Trade Nottingham tomorrow morning from a very early hour. I usually go to Rockaboom in Leicester but have been tempted over by the massive events going on in the vicinity. It looks set to be a great morning and a fantastic way to celebrate the wonder that is The Record Store.

I have a number of items I want to pick up, but the priority is the Supergrass 7″ “Sofa (of my Lethargy)”. I don’t really know why it’s being released but it is intriguing. I have every Supergrass vinyl single, including the likes of “Never Heard Nothing Like That Before” and “Rebel In You”, so missing this would seriously damage my internal OCD tendencies.

Elsewhere Gaz Coombes has his latest single “Detroit” available and that should be popular due to its constant playing on BBC 6 Music. I won’t reveal what else I’ll be looking for in case it causes a spike in popularity, but I’ll update tomorrow with how it goes.

Maybe I’ll see you down there.

Main Setlist:
Buffalo
Sub Divider
Seven Walls
The Girl Who Fell To Earth
Needle’s Eye
One of These Days
White Noise
Hot Fruit
20/20
Detroit
The English Ruse
To The Wire 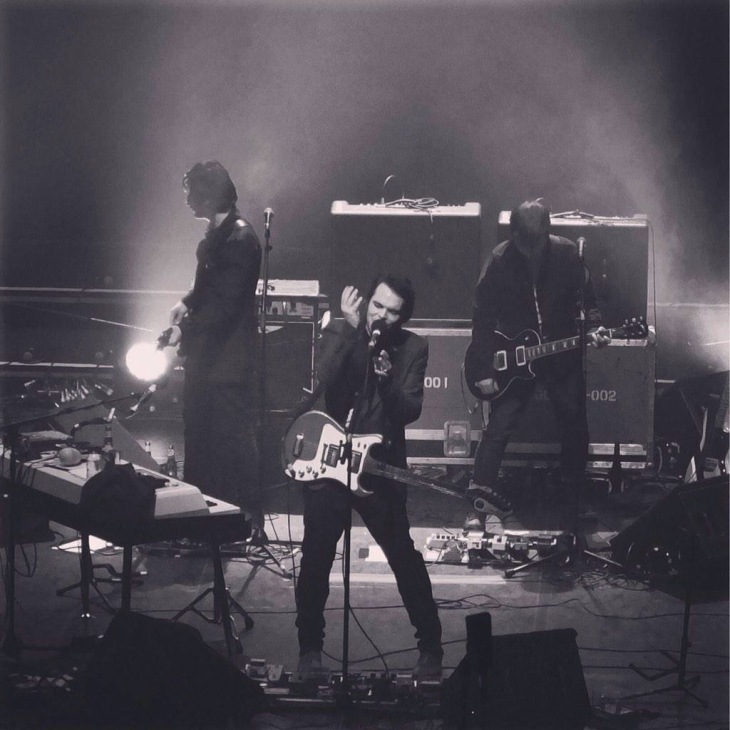 What an amazing time of it Gaz Coombes is having right now. Having seen his band unexpectedly dissolve back in 2010 following a couple of unfairly overlooked albums, he released his cinema-inspired debut album in 2012 – Gaz Coombes presents Here Come The Bombs. However, this again failed to significantly ignite interest from either critics or music buyers. But then Matador happened, and he’s ridden his the wave of good press straight to the Queen Elizabeth Hall with a fully-packed audience eager to see his live treatment of the the new songs for the first time (and more than likely the songs from his debut solo release).

The headline set is kicked off with the epic Buffalo, also the lead track from the latest album. With its mysterious piano-led riffs and digital ambience building to a blasting chorus, it’s the perfect way to announce himself to an audience perhaps unaware of exactly what to expect.

Only three songs survive from his debut album: White Noise, Break The Silence and the roaring second song Sub Divider. One of the best-received songs of the night was One Of These Days, a song released as a double-A-side release with Break The Silence in 2013. It’s a wonderful song that would have been right at home on his latest album but was a good early glimpse of where he was heading, and served as a huge contrast to some of the tracks from the debut album.

He boldly chooses to play no Supergrass hits tonight, a slight change from his last tour where he snook in Sitting Up Straight and Moving as encores. This departure from his past shows a desire to be taken seriously in his own right, with no need for the songs that brought him fame but essentially come from a very different stage in his life.

But the stage is brought to life most when he launches into the songs from the latest album, still fresh in their minds and also to the audience. You can never underestimate the joy of seeing a band on a tour for a specific album, as you’re going to see songs that may only get a run out for one tour. I for one was thrilled to see tracks like Seven Walls and The Girl Who Fell To Earth in this grand hall, probably for the first and last time. The same probably can’t be said for 20/20 and Detroit, both of which are songs right up there with the best of his career (which it’s easy to forget is now in its third decade). These tracks won’t go away easily and will inevitably stick around for a while on his live setlist.

The evening of top quality entertainment has just served as yet another reminder of how much talent Mr Coombes has. The reinvention process is now officially complete and I’m glad to see this new-found maturity seeping into his music. I think we all hotly await his next move, but we’ve got one of the albums of the year to comfort us for a good while yet.

His latest album can be bought from his official website, with a limited amount still available with a signed print. His previous album is also available from the same site.