The Rogue One: A Star Wars Story panel took place earlier today at the Star Wars Celebration in London, and it has opened the floodgates on a plethora of information on the upcoming standalone film.

Here we run through some of the highlights.

What are the character names and who are they?

Felicity Jones takes the leading role as Sergeant Jyn Erso. Jyn was described by Jones as a lead character distinct from the others in the Star Wars universe in that she is already an established character and as such we don’t go on a journey of discovery with her. This is perhaps because it’s a standalone film and there simply isn’t time to develop a serious character arc whilst delivering an entertaining blockbuster film.

Jones is most famous for her Oscar-winning role as Jane Hawking in the 2015 film The Theory of Everything, for which she was nominated for an Academy Award. She also featured in Like Crazy, Breathe In and Cemetery Junction

Diego Luna will play a prominent role as Cassian Andor. We learned today that he is a Rebel Intelligence officer. It appears that he will be the second-in-command to Jyn within the film. He has a close relationship with droid K-2S0.

One of the most entertaining discussions was with Alan Tudyk, who features as the now-obligatory droid in the film. He is a former Imperial droid that has been reprogrammed by Cassian. However, the reprogramming hasn’t really taken 100% and he has quite a few gaps in his personality. One scene showed him refusing to carry Jyn’s luggage because it wasn’t in his new protocol.

Tudyk has a rich history as a voice actor for animated films, including Big Hero 6, Wreck-It Ralph, Zootopia and Frozen, as well as starring in Firefly.

We knew Riz Ahmed’s character name a long time ago, after he accidentally leaked it on his online CV. Bodhi is an imperial craft pilot who is also a member of the rebel alliance. His explanation of this caused much hilarity from the crowd: “You know, people work at big organizations… but they don’t agree with everything they do.”

Ahmed is one of Britain’s finest young actors, having excelled in roles in Four Lions, Ill Manors and Nightcrawler. His presence in this film will doubtless be a huge enhancement to the conviction of the rebel team.

“I can’t see but I can feel with my heart and believe in the Force,” said Donnie Yen of his character Chirrut Îmwe. The clips showed him kicking-ass in some beautifully-choreographed fight scenes, with a distinct hint of Jediism in his grace. I’d be surprised if he wasn’t a Jedi.

Unfortunately, a huge spoiler was dropped about this character by co-actor Jiang Wen. I won’t perpetuate it here.

Yen may be vaguely familiar to Western audiences following small roles in Blade II and popular martial arts film Hero, though he should be more fondly remembered for Ip Man.

Baze has a big gun. That’s the line Jiang Wen took when he decided he wasn’t going to reveal much about his character. Yes Wen, keeping the eventual fate of characters close to your chest is very much a good idea when dealing with such a huge franchise.

Wen doesn’t have much in the way of credits that are familiar to the West, other than a directorial position for a segment of ‘New York, I Love You’. If you’re desperate to see him in action, 2011’s The Lost Bladesman would be a perfect place to start as it co-stars fellow Chinese actor Donnie Yen. 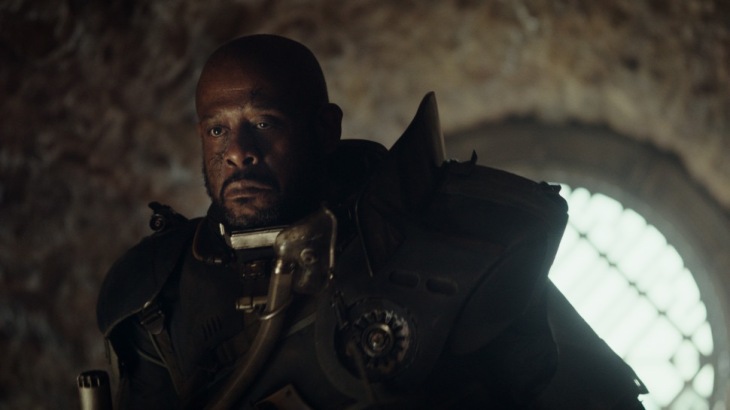 Forest Whittaker is a man who needs no introduction, but I’ll give him one anyway. At just 55, he has had a career spanning four decades and has received plaudits throughout his career for mesmerising turns in the likes of The Last King Of Scotland, Platoon and The Butler. His credentials are certainly not in doubt.

Saw Gerrera is a character that has featured heavily in The Clone Wars TV series. His character was very headstrong and a natural leader, regardless of whether or not this was wanted by those around him.

Mads Mikkelson stars as Galen Erso, whom it was revealed is Jyn’s father. He is also a scientist that “invented something so beautiful, so fantastic, that it might change the universe.” Whatever that means.

Mikkelson will be familiar to anyone that enjoyed Casino Royale back in 2006, though he is perhaps better known for his lead role in TV series Hannibal, which has been around for 3 years. 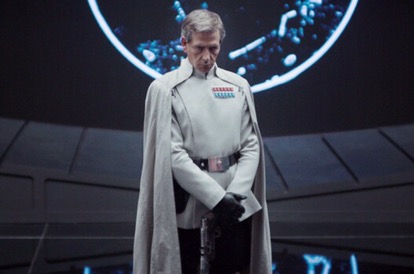 Australian Ben Mendelsohn is currently troubling the Netflix airwaves with his starring role in Bloodlines, which recently won him an Emmy. He also featured in The Dark Knight Rises and Starred Up, the latter of which is well worth a watch.

His character is the main protagonist in the film, trying to become the Emperor’s new right hand man at the expense of Darth Vader.

What else did we learn?

Alan Dudyk was chatting about how nice it was to meet Anthony Daniels once at the Episode VII wrap party, to which the Rogue One cast were invited. That indicates that C-3P0 is not in film, or they would have more than likely met at some point in the filming or script reading process.

Whilst this may mean that our favourite droids and other original trilogy characters have been left out this time, we did get a glimpse of Darth Vader at the end of an exclusive short trailer. James Earl Jones will return to voice him. It was very cool.

Warwick is a big fan favourite and has been all over the Celebration event, hanging out with fans and keeping people happy. It was a great moment when he was glimpsed in the behind-the-scenes footage, much like the brief appearance a couple of years ago by Simon Pegg in the Episode VII sneak preview.

That takes his film tally up to four, which means he still has some catching to do to overtake Peter Mayhew, Kenny Baker and Anthony Daniels.

… And so should we. It was great to see him offer his support to Lucas, whose name has been mud for the last 17 years. It’s easy to forget that he created this massive universe and has brought joy to millions of people worldwide for the last 40 years.