The announcement that ‘Loveless’ was nominated in the Best Foreign Language Film category at this year’s Academy Awards may well have brought welcome attention to both the film and the director, Andrey Zvyagintsev, who underwent a turbulent time last time this happened. The Russian film industry and government championed their new protege, embracing the excitement felt across the world following his pictures The Return, The Banishment and Elena, all of which were nominated for awards at either the Cannes Film Festival or the Venice Film Festival. However, when the state-funded ‘Leviathan’ was released, the government all but disowned the director, owing to the view of Russia he was showing to the world. His is a broken Russia, and it’s something that apparently shouldn’t be celebrated.

‘Loveless’ was recently screened in a special preview at Broadway Cinema in Nottingham, with the audience joined by director Andrey Zvyagintsev and co-writer Oleg Negin. Zvyagintsev looked tired when answering question on his involvement with the Russian government. He has spoken frequently and honestly about his opinion on the matter, and there must be a slight frustration for him having to retread old ground when he is trying to promote his latest project. Quite justifiably too; there is plenty to celebrate from the film alone without concentrating on his dealings with a country that no longer supports him.

‘Loveless’ is a harrowing tale that hangs around two young divorcees who are in the process of separation. Zhenya (Maryana Spivak) is a younger woman obsessed with the material side of life, spending her time in beauty salons and ensuring every key moment of her shallow days are captured on social media. She has entered into a relationship with a rich older man named Anton (Andris Keyshs). Her former husband, career man Boris (Aleksey Rosin), is now involved with a much younger woman named Masha (Marina Vasileva).

Both Zhenya and Boris are desperate to start their respective new lives with their new lovers. Unfortunately, their pre-teen child, Alyosha (Matvey Kovikov), is the one sticking point. He has an anger in him that is typical of a teenager with parents going through an untimely divorce. One night he overhears his parents in a heated debate about his fate, and in the morning skips school to run away. It is this action that forces his parents to work together to try to find him, however tough it may be for them both.

Zvyagintsev has created a film that is really tough to watch, partly because it shows a reasonable account of each of the three central characters. It is sympathetic to each of them to a certain degree, however unreasonable their actions are. The parents married too young and now hate each other and are paying for their mistakes. Alyosha is a young boy who needs the support and stability at home but gets nothing.

The long period between him running away from home and his parents realising is an indictment of both a country that does little to find missing people and a planet growingly obsessed with self-betterment and social media. The former is underlined by the formation of Liza Alert, a not-for-profit organisation that organises volunteers to look for missing people, which is featured prominently in the final third of the film. It’s horrifying to watch both parents living out their day, spend passionate time with their respective lovers, sleep, wake up, go off to work for a second day and only later realise he isn’t there. Alyosha is a real after-thought now in their lives, which in some ways justifies his decision to run away. 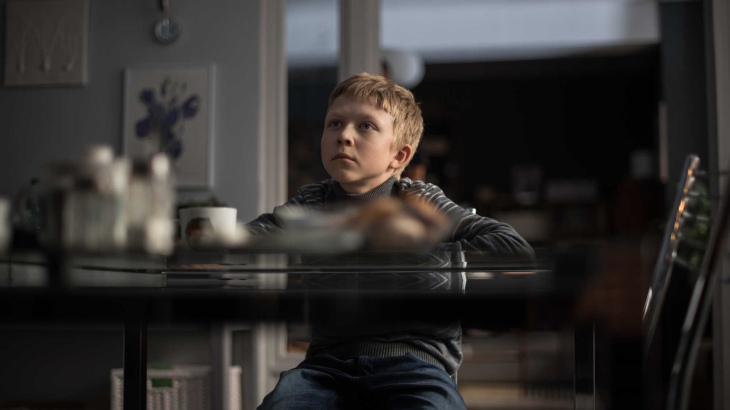 It’s beautifully shot by director Zvyagintsev and cinematographer Mikhail Krichman, even if the Russian authorities don’t like what is being shown. It was shot entirely in Moscow, a city that Zvyagintsev is proud of and wanted to show in all its beauty, albeit drenched in more realism than is expected.

It is also a film filled with symbolism, which is left dangling for even the least aware viewers to see. It’s hard to miss the statement being made as self-obsessed Zhenya runs outside on a treadmill, ignoring the beautiful backdrops and juxtaposing political unrest on the television, instead focusing solely on her own agenda of shallow betterment. In case the hint wasn’t too obvious, she wears a full tracksuit with the words “Russia” emblazoned in bold letters across the front.

‘Loveless’ is unique and worthy of its Academy Award nomination. With a meaty storyline and a trio of brilliant performances in the leading roles, it is a worthwhile way to have your mind challenged and your conscience displaced.