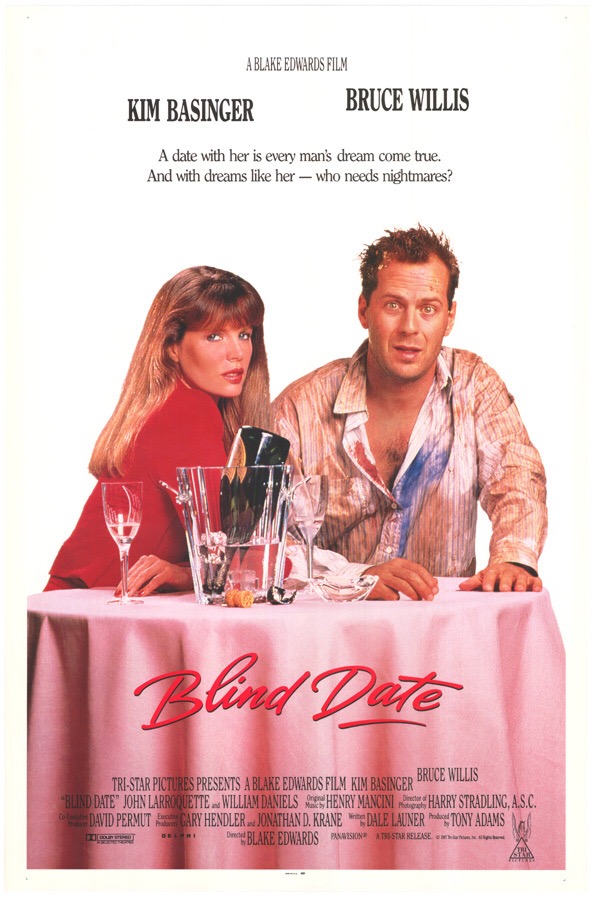 What do you get if you cross the director of Breakfast at Tiffany’s and The Pink Panther, one of the sexiest women of a generation, the film debut of one of the most bankable actors of all time and a soundtrack by one of the most celebrated film composers in film history?

A steaming pile of cinematic turd, that’s what.

It’s a rare occurrence to find a film with a run time of just 95 minutes that somehow feels like it drags on. But Blake Edwards has managed it with ‘Blind Date’, a turgid effort if ever you’ve seen one.

Bruce Willis does his best as an ambitious and hardworking career man named Walter Davis. Walter must attend an important dinner with his colleagues, boss and the Managing Director of an important business partner from Japan. However, Mr Yakamoto has very traditional values and Walter is advised to take a date to the meal. In desperation, he calls up his friend Ted (Phil Hartman), who recommends he takes his wife’s cousin Nadia, played by the usually irresistible Kim Basinger.

It’s unusual that a rom-com tries to put a shocking twist or genre-challenging break to the norm. Blind Date doesn’t even attempt to change this. The humour derives from the fact that Nadia can’t take her drink and Walter is advised not to let her have even a sip of alcohol. Of course, Walter forgets this and Nadia instantly becomes wild, causing absolute mayhem at the dinner and leading to Walter losing his job.

By the end of the night they are being pursued by Nadia’s maniacal ex-boyfriend and Walter ends up in prison. It feels like a spoiler but the entire plot is played out in the tag line on many of the posters. Plus it is celebrating its 30th anniversary this year so it’s hardly new news.

One of the most remarkable choices is to recolour Basinger’s hair brown and cover up her eyes with a dreadful fringe. This is one of the pin-ups of the 1980s, known for her beautiful blonde hair and striking blue eyes. Here, she loses one and has the other covered up, with no obvious reason for either choice.

Bruce Willis, here billed second to Basinger, is clearly still finding his feet as he made the transition from American sitcom Moonlighters – and that dreadful pop career – to Hollywood A-lister. It’s hard to imagine that by the time this film was released he was already filming Die Hard. Noticeably, Fox Plaza, tbe building that starred as the Nakatomi Towers in that film, can be seen half-built in the background of a scene at Walter’s office.

Remarkably, Madonna was originally cast to star as Nadia in the film. She turned it down because director Blake Edwards refused to accommodate her wish to cast Sean Penn, at the time Madonna’s husband, as Walter. Of the incident, she said, “I was supposed to have approval of… the leading man, but they didn’t tell me they’d already hired Bruce Willis.” In my opinion, this film would have been even worse had the pair been involved, and viewers need only seek out 1986’s ‘Shanghai Surprise’ for evidence of exactly how bad it could have been.

Even Henry Mancini’s score feels bland and half-hearted, which is disappointing from the man who brought us ‘The Pink Panther Theme’ and ‘Moon River’. I do note that a better film could have made me see the score differently.

Fans of The Simpsons will take great pleasure in hearing Phil Hartman produce his best Troy McClure voice when he’s describing Nadia over the phone to Walter. It’s unmistakable and one of the few positives that helped me get through the ordeal.

It’s a film that has been largely forgotten by everyone who saw it and everyone involved with the film. Forgetting it is something I’ll be trying to do too, as quickly as