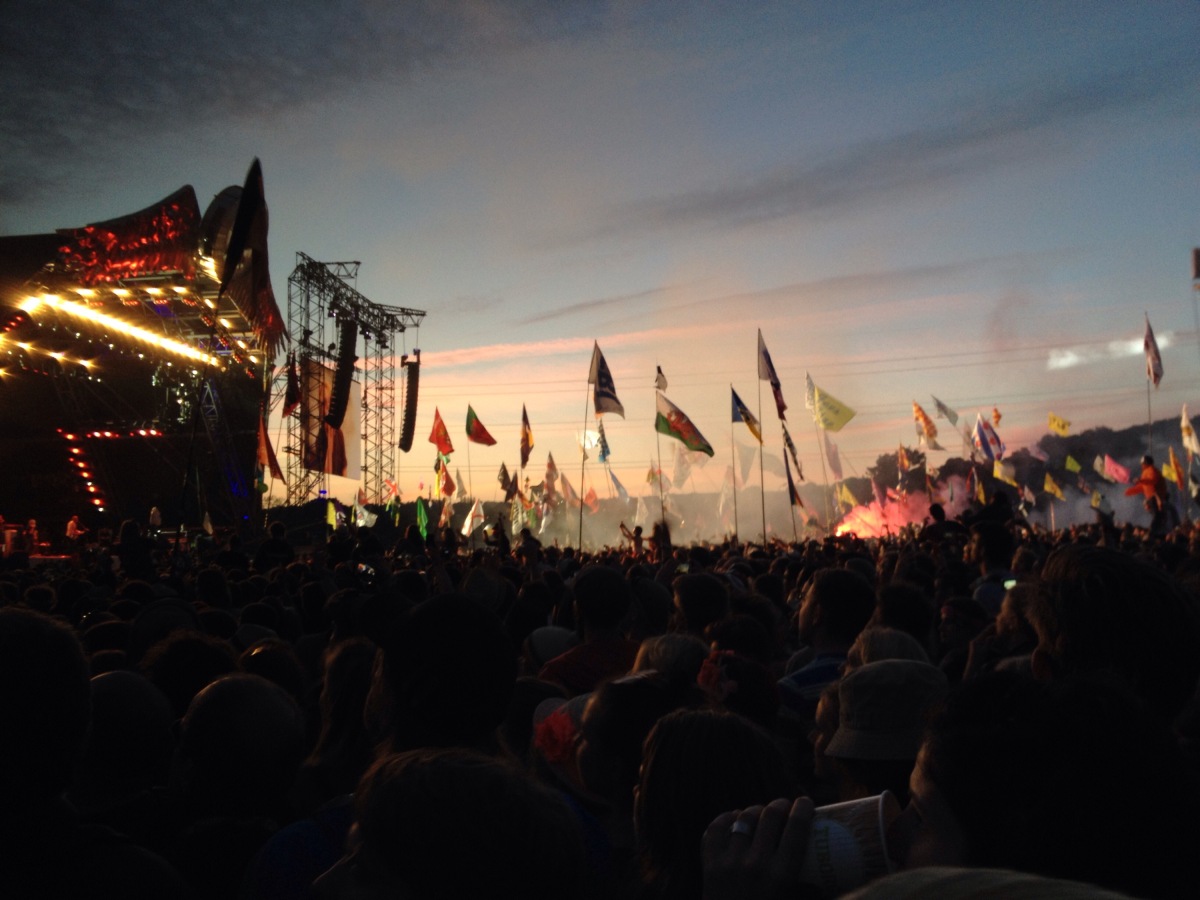 Well, there we have it. Another year of good-hearted, fun-loving live music done and dusted as Glastonbury 2015 comes to a close. All the flaws my body has developed over its first thirty years have come to the surface and I am out of both alcohol and money. It has been emotional.

The highlight set for my party on the Sunday was a crowd-pleasing effort from Paul Weller. With a career spanning 40 years he had plenty to go on and the song selection was spot on, allowing him to promote his new material a little whilst reminding everyone just how good he is. My favourite track was “Above The Clouds”, though “Peacock Suit” was a close second. His voice didn’t even have a hint of cracking at any point, which bodes well for a long future of touring yet. It was also nice to see Ocean Colour Scene guitarist Steve Cradock on stage with Mr Weller again. Well done sirs. It was a stunning set.

The Who were the first headline act we saw on the main stage. Hit after hit arrived on the sound-system as a genuine rock giant showed the Glastonbury crowd what a real gig was like. Kanye take note – you can get cocky once you’ve had some quality output. Two hours of rocking inevitably ended with a bit of set destruction, but we wouldn’t have expected anything less.

Apparently they were having sound issues but I didn’t really notice; far worse was Lionel Richie earlier in the day who sounded like the bass drum was being played by someone keeping time to a different tune. Wholly off putting and a genuine set ruined for everyone I could hear complaining vocally in the crowd.

The Shires were an odd but fruitful choice. I was pushing to see them, against the will of at least one of my party. Everyone was pleasantly surprised by the gorgeous country tunes and beautiful vocals they are blessed with. They aren’t a groundbreaking act and I think everyone there knows that, but what they do have are some excellent songs to sing along to and an inspiring attitude that got the whole audience on side immediately. “State Lines” is still in my head now.

Elsewhere Eric Bibb and The Bootleg Beatles were juxtaposed on the Acoustic Stage but were equally brilliant; Patti Smith seemed like she was struggling to engage with the crowd, although the Dalai Lama saved the day with some thought-provoking messages; and the night was rounded off by a secret DJ set from 2manydjs at Arcadia, because we love having our faces burned off by a giant spider [1]. We even managed to take in an under-advertised sneak preview of the new Pixar film Inside Out (more on that at a later date).

The countdown has now begun to the return home and have a proper shower and a comfy. Believe me, it is much-needed.

Thank you Mr Eavis for inviting us all to the best party of the summer. Sorry we wrecked everything. We promise we’ll be tidier next time.

[1] To be honest, we felt so claustrophobic that we went back to our campsite and listened from there. You know, like all the cool kids.

Today was the big day. Kanye West arrived at Glastonbury with his own brand of Yeezus-y goodness, set to wow the crowds and berate anyone who tried to stop him. Probably. I didn’t go to his crappy set because I was too busy being blown away by a breathtaking performance from Suede on the John Peel Stage. Brett Anderson had the audience in the palm of his hand and the whole band were on top tight form from start to finish. I’d waited for 20 years to actually see them live and it was well worth the wait. Being floored by a stunning rendition of “Beautiful Ones” will doubtless be one of the lasting memories of this festival for me and the many 1000s inside the rammed tent.

Earlier in the day, Swim Deep were completely lost on me as the first band of the day; Jane Weaver literally and figuratively blew me away on West Holts [1]; and both Giant Sand and Gaz Coombes proved to be solid choices at The Park Stage mid-afternoon. 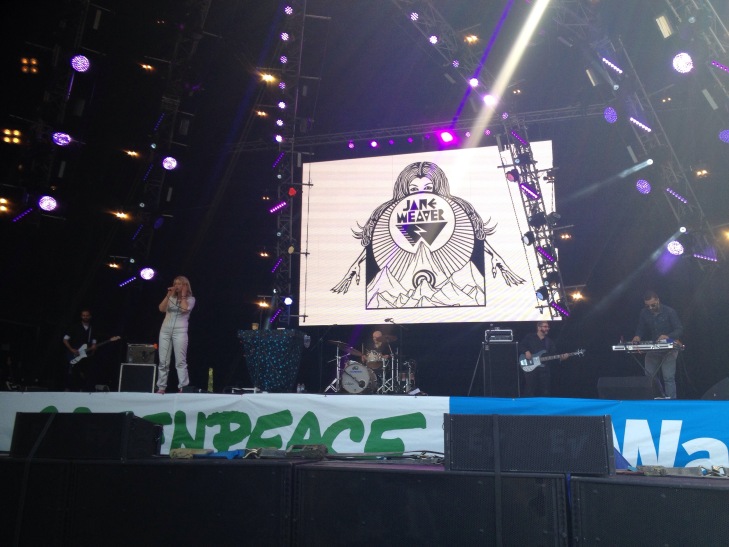 Gregory Porter looked set to be a great way to see in the evening but we left a little underwhelmed. I actually blame it on his style being well suited to relaxation, meaning we ended up almost falling asleep. His record has been on constant play in my house at times this year and it translated well into a live show. I suspect it was a case of bad timing on my part, mixed with the fact we were absolutely shattered.

Fortunately Paloma Faith and Pharrell Williams picked the pace up with a couple of hit-packed sets that got the Pyramid crowd ready to start the Saturday party. Im a huge fan of Paloma and she was on top form tonight, playing tracks from all of her albums along with a memorable Jimi Hendrix cover. Her outfits are always talking points and this was no different.

Paloma was very apologetic throughout, implying she made a misinterpreted comment in the media at some point. I’m not privy to this info as I’ve been stuck in a field for almost a week now, but who cares when she sounds this good? Inevitably whatever she said has seen her words twisted to sell newspapers and clicks.

I was shocked how many tracks of Pharrell’s I knew. Obviously he’s been around for a long time now and has produced many hits off different artists, but he’s an excellent artist and we were left wondering why he wasn’t headlining. When you’re partly or fully responsible for three of the biggest-selling singles in the last two years (“Blurred Lines”, “Get Lucky”, “Happy”, all of which broke the million mark on sales) you deserve to top the bill, especially when the act above you has had nothing of note out for a while. He’s one of the best frontmen I’ve ever seen, and it comes entirely from his cocksure confidence. My only criticism for Pharrell was that a couple of songs sounded like they were heavily reliant on a backing track, though perhaps my ears deceived me.

I caught the end of La Roux’s set and she sounded spot on. She’s still underrated in my eyes and is slowly building up a solid catalogue for her live performances, which far outclass the recorded versions. If you like her style then make sure you see her this tour before she disappears on another hiatus.

I’m sure Kanye will be the most talked about act tomorrow outside the festival, just like Florence probably was this morning. Let them. With any luck the chat will have ran out by the time the festival finishes and I re-enter the real world. Anyone who was at the Suede performance will testify just how special that set was, even though it won’t grab headlines.

Oh and I managed to wash my hair. So that was nice.

[1] Sorry Jane. When your set started the bass was ridiculously loud. We loved it but we only lasted about ten seconds near the stage before retreating to a safer distance. We couldn’t take it but still loved it from afar – it wasn’t a reflection on you!