If you’re a casual fan of the history of cinema, you may be forgiven for thinking that Stanley Kubrick has only released eight films.

The reason for this misunderstanding? I blame the brilliant but consistently re-released boxset of films that features every feature he directed from Lolita onwards, along with a documentary on his career titled “A Life In Pictures”. It’s so prominent and features so many classic films that his early output is often forgotten.

The biggest casualty of this is Spartacus, the 1960 epic that starred Kirk Douglas. It seems obvious, but there’s a whole generation of film fans that are well aware of the film and the director but are surprised that Kubrick was at the helm.

It’s a shame that his early output is so criminally overlooked, but it’s also a problem that Masters of Cinema and Arrow have put a lot of effort into correcting. First came 1953’s Fear and Desire, a film steeped in rumours that Kubrick himself wanted to destroy all known copies of. It is far from his best work, but has an audience. It was bundled with three Kubrick-directed short films: Day of the Fight (1951), Flying Padre (1951) and The Seafarers (1953). These aren’t essential viewing for anyone other than the most ardent Kubrickian, but plot a path to his genius-level filmmaking that was revealed shortly after.

Arrow’s release of 1956’s The Killing is similarly detailed. The Sterling Hayden-starrer was a critical success on its release but commercially didn’t really make it out of the starting blocks, serving second fiddle to a now-hard-to-find film called Bandido! and eventually losing $130,000.

So where does Paths of Glory fit into this? It was Kubrick’s final film before his epic box office smash Spartacus in 1960, which was also critically praised and thus provided him much more leeway when it came to choosing his next project, which was Lolita.

Arguably, the reason he was offered Spartacus was in part due to his success with Paths of Glory. Indeed, the original director (Anthony Mann) was sacked after just one week of filming and it was this that led to Kubrick being hired, not least for the fact that Kirk Douglas was the star of both and his production company – Bryna Productions – was behind Spartacus and vicariously the hiring of a replacement director.

The short reason for Douglas’s affinity to Kubrick is quite simple – the film is absolutely brilliant. Douglas is allowed to explore a complicated character with no compromise to the artistic integrity, despite the fact that the film was banned in several countries for content deemed controversial at the time of release. It is a really powerful display of his acting ability. 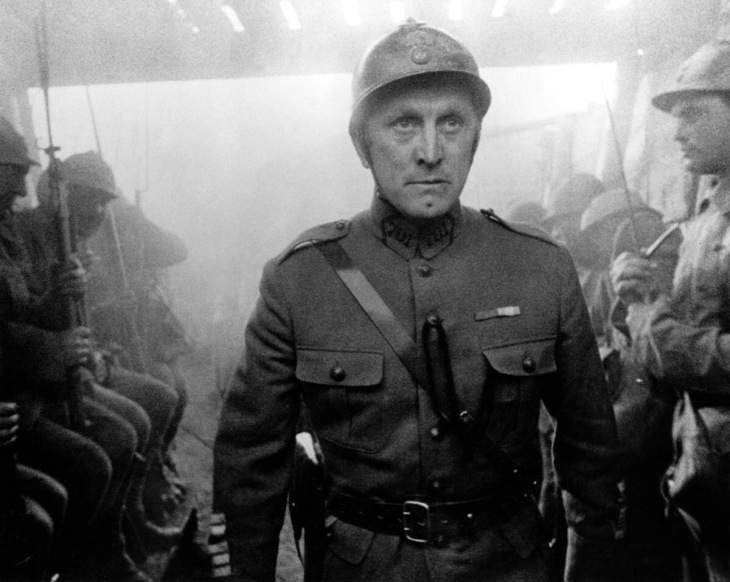 Set entirely in French army bases during World War II, the basic premise of the film is that Colonel Dax (Douglas) is ordered by his superior General Mireau (George Macreary) to attack the “Anthill”, a well-defended German stronghold. Mireau’s reasoning behind his decision is entirely selfish as he has been offered a promotion for a successful attack on the Germans. Douglas attempts the manoeuvre despite knowing it is essentially a suicide mission for his men, but they all quickly realise it is doomed to failure and they retreat. They are subsequently accused of cowardice and three men are selected for trial and face the death penalty, with only their own accounts and Dax’s legal background to save them.

The film was banned by several countries on its original release, deemed as anti-military. Subsequently, cinema-goers in France, Germany, Switzerland and Spain were unable to see it until decades after its release. It is understandable, given the portrayal of the hierarchy and corrupt decision making. The integrity of the film is also maintained with a wholly miserable ending to the film, an early sign that Kubrick wasn’t one to conform to normalities.

Watching it now, it feels way ahead of its time. There is no happy ending. The characters are fully formed and Kubrick is confident enough to let the brilliant Kirk Douglas engulf the entire frame with close-ups and lingering shots.

The action sequences as the troops push over the top into no man’s land are engrossing and brutal, giving a reality to their predicament. Without getting this right, the whole picture would have fallen flat.

This is absolutely a film that needs to be watched and shouldn’t be seen as just a point of interest for die-hard Kubrick aficionados. If you can find a copy and want to see beyond The Chosen Eight, you really need to invest.