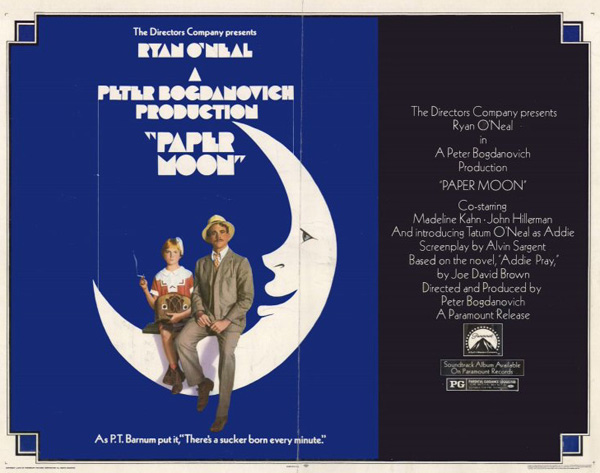 One of the most sure-fire ways of making an enjoyable and effective film is to ensure the chemistry between the two lead characters is strong. What better way to achieve this than by casting a father and daughter in what is essentially a buddy film?

In Paper Moon, we follow the story of tomboy orphan Addie Loggins (Tatum O’Neal) as she is taken under the wing of con-man Moses Pray as he agrees to take her from her mother’s funeral to her aunt’s house in Missouri. She is convinced he is her real father, a point that is hinted at throughout, despite his continued denial of the fact. One thing that they’re both convinced of, however, is that they make a great pair as a scamming duo, going door-to-door convincing recent widows that their recently deceased husbands had ordered them a personalised bible. This serves as an excuse for them to go on a prolonged adventure of dishonesty, an adventure that seems far more appealing than their other limited options. 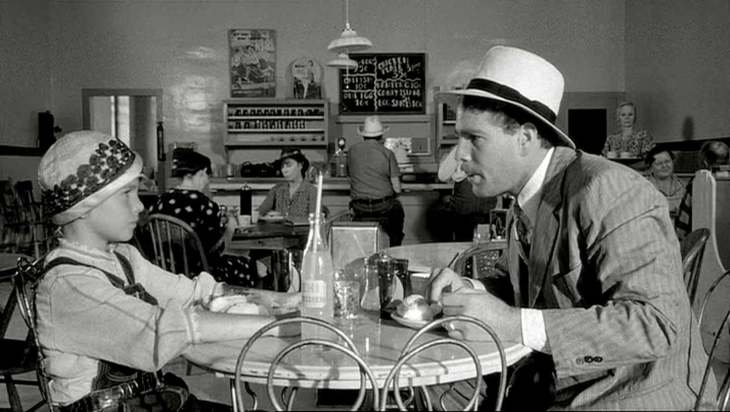 The chemistry between the O’Neals is excellent.

Much was made at the time – and has been since – of Tatum O’Neal’s performance. Indeed, she remains to this day the youngest person to win an Academy Award for Acting. At 1 hour, 6 minutes and 58 seconds, it is also the longest performance to receive a Supporting Actor/Actress Academy Award. It is playful and at times unintentionally comedic, but the playoffs with father Ryan are brilliant to watch. One memorable scene involves a long one-shot as they drive and argue, both livid at each other before turning it around to agree despite their tones still being that of an argument. It’s almost so good it doesn’t feel like they’re acting, although it allegedly took 39 takes over two days to get right.

One thing the film never answers is the question of whether the two are really father and daughter. The decision is made instead to leave it open as they head off into the sunset, presumably to continue much as they did in this film (a relationship explored in a panned TV sitcom spin-off series starring Jodie Foster). It is a nice decision – the fact they need each other, either as a father figure or as a driver to act responsibly, is to them more important than finding out this truth, at least at this stage in their relationship.

The bonus features are worth watching and provide a valuable insight into the making of the picture. The highlight is an anecdote involving Tatum repeatedly fluffing a line, resulting in her father having to eat countless amounts of waffles, much to the delight of Tatum. In fact, this was deemed so important as an example of their chemistry that the outtake was incorporated into the original trailer.

The cinematography by the Hungarian László Kovács adds a great deal to the authenticity of the film and its success in recreating 1935 Kansas. Coupled with a timeless soundtrack and a great attention to detail in the scenery and costumes, the result is that it transports the viewer completely into the environment, adding further embellishment to the excellent performances of both stars and their supporting cast.

A unique film with a lot to offer even the most ambivalent of viewers, this is one of the best re-releases of the year.

Paper Moon is available on Masters of Cinema Blu-ray now.