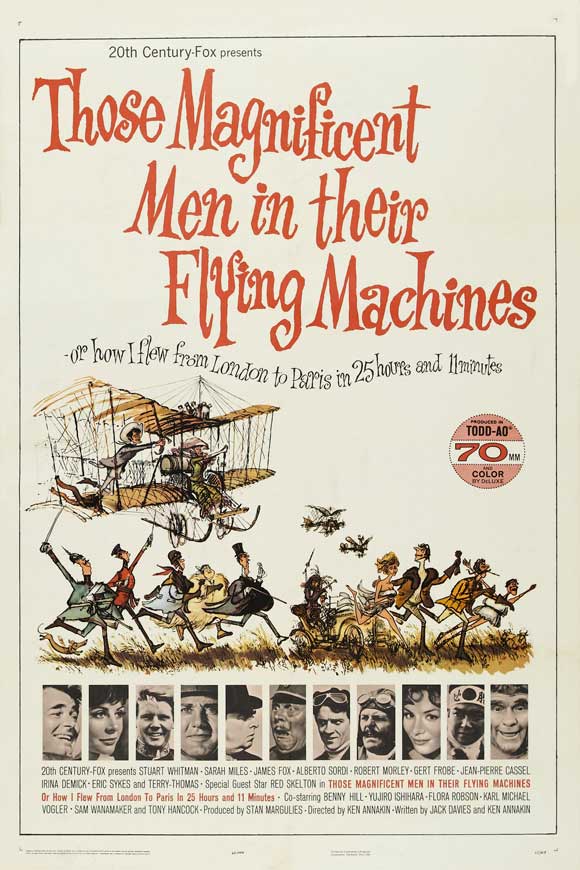 On 14th July 1965, NASA’s Mariner 4 spaceship performed the first flyby of Mars, returning the first ever pictures of another planet and providing Earth with closeup observations of the surface. It was a time where the world was gripped by the space race, seeing two world powers at loggerheads to prove their technological superiority.

Just one month earlier, Ken Annakin’s epic ensemble comedy Those Magnificent Men in their Flying Machines hit cinemas globally. A homage to the beginnings of manned flight, the story follows fourteen pilots in brilliant replicas of 1910 aircraft as they attempt to fly from London to Paris (via Dover) to win a £10,000 prize put up by Lord Rawnsley (Robert Mawley), a British newspaper magnate. Mixing madcap humour with a loving recreation of the excitement once felt by the world for the flying machines now seen as highly primative, the film not only captured the essence of 1910 but also the imagination of the 1965 cinema-going public.

One of the main threads that runs throughout the film is the love triangle between the magnate’s daughter Patricia Rawnsley (Sarah Miles), her fiancé Richard Mays (James Fox) and rugged American Orvil Newton (Stuart Whitman), the latter two of which are also competing in the race. This thread serves as a springboard for a small amount of humour but allows the bigger laughs to be built around this central plot.

Many of the other characters conform to the national stereotypes: the Prussian Colonel Manfred von Holstein (Gert Fröbe, fresh from his titular role as bond villain Goldfinger) can’t do anything without a set of instructions; French womaniser Pierre Dubois (Jean Pierre Cassel) spends the whole film flirting with identical women (all played by Irena Demick) from different European countries in one of the film’s best running gags; Yamamoto (Japanese megastar Yujiro Ishihara) is a well-spoken Japanese naval officer who all the competitors fear will easily win the race. Elsewhere there are rewarding cameos from Tony Hancock, Benny Hill and Eric Sykes.

The main theme tune contains a highly infectious melody that has remained in the public conscience far beyond the popularity of the film itself. Ron Goodwin’s music is introduced alongside a humorous caricatured animation provided by Ronald Searle and it serves as the perfect introduction to the film. Beware – it gets stuck in your head and will refuse to leave for days.

There’s a hint of Wacky Races throughout.

Whilst the concept behind Those Magnificent Men in their Flying Machines closely follows It’s A Mad, Mad, Mad, Mad World – released two years earlier in 1963 – to dismiss it as a carbon copy is to do it a disservice. There’s more on offer here than a simple rehash.

It also spawned a sequel that would be more easily associated to this film but for the fact its name was changed for most releases from Those Daring Young Men in Their Jaunty Jalopies to Monte Carlo or Bust. That film has a nearly identical premise, with many reprised roles, but is set around cars rather than planes.

There’s plenty on offer here to warrant a first viewing and those that grew up with it won’t be disappointed by revisiting it.

Those Magnificent Men and Their Flying Machines is available to buy now from Amazon on extortionate Blu-ray or DVD.

[Note] Huge thanks to Ahoy Small Fry for the recommendation on this!