Holy motors! I just watched a live-action Street Fighter movie, and it wasn’t bad. In fact, I’d go as far as saying it was… great. Let’s go back in time to justify my surprise.

The year is 1992. I’m seven years old. I’m in possession of a Commodore Amiga and a copy of Street Fighter II: The World Warrior. My brother, channelling every ounce of his O.C.D. nature, has annoyingly mastered the character of Ryu, who everyone knows is the coolest character on the game. This was no mean feat, especially on a Powerplay Cruiser. When I say “mastered”, he was actually untouchable on it. Occasionally the computer A.I. would get into hadouken competitions with him, but couldn’t keep up. He was, at this moment, the coolest kid at school, a height he wouldn’t achieve again until he accidentally set off an alarm and the police showed up at school. As we all know, cheaters never prosper. [1] [2] 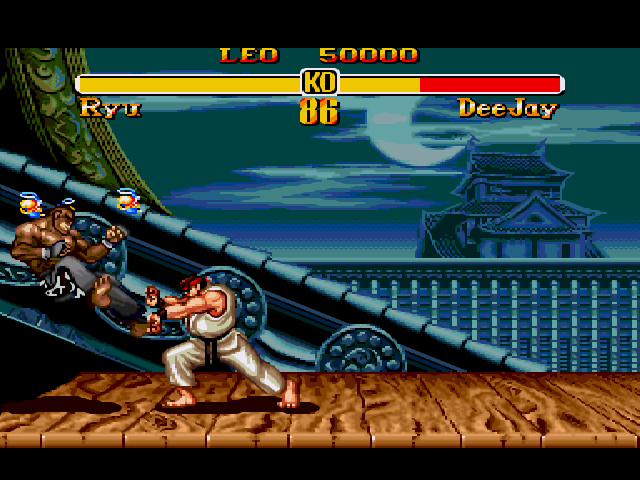 Sit down DeeJay. Sit down.

Unfortunately, whilst the games came thick and fast, seemingly adding lots to the gameplay and making sure the improvements were worth the extra investment, the associated media interpretations were mixed to say the least. There were some good things out there. I remember being a huge fan of the comic book, which itself was an adaptation of Street Fighter II: The Animated Movie, a decent-quality anime version of the game.

Unfortunately, all interpretations of the Street Fighter characters’ back stories were immensely overshadowed by the big-budget, star-studded and hugely hyped film titled Street Fighter: The Movie. After I got over the initial dismay at the idiotic titling of the film, it truly started to sink in – this was possibly the worst film I’d ever seen. [4]

Street Fighter: The Movie starred Jean Claude Van Damme as Guile, Kylie Minogue as Cammy, Raul Julia as M Bison in his final cinematic role and a young Ming-Na Wen as Chun Li, almost 20 years before she’d reappear on our screens as Melinda May in Marvel: Agents of Shield. This hotch-potch of acting talent was gelled together by a flimsy plot and some terrible dialogue and it destroyed in an entire generation any interest in the Street Fighter franchise outside of simply playing the games.

By 2009, studios felt safe enough to release a Chun-Li origin story starring Kristen Kreuk, but this went down almost as poorly as the 1994 movie. In fact, arguably worse. It really wasn’t worth the time and effort, but fortunately not many people put either into it.

So it’s with great trepidation with which ardent fans approach this latest offering, Street FIghter: Assassin’s Fist. It is essentially the origin story of Ryu and Ken, the main characters of the original Street Fighter game and firm favourites in the Street Fighter II series. I’m happy to say that I  wasn’t disappointed at all. I was actually rather impressed.

The story takes place in a secluded area of Japan in 1989 as Ryu and Ken learn the traditional ancient fighter technique of 暗殺拳 / Ansatsuken (Assassin’s Fist) from their 先生 / Sensei (master) 剛拳 / Gouken. Ryu appears to be achieving more than the hot-headed Ken, who is becoming increasingly frustrated by the slow pacing of the training. Through a series of flashbacks we learn the true past of Gouken and his relationship to his younger brother 豪鬼 / Akuma as they both trained in Ansatsuken.

Stylistically they get everything right, both in terms of making a good film and also in terms of being respectful to the original source material. There’s very little in terms of deviation from the back-stories generally considered to be canon, and the only extra embellishments comes in the form of explaining answers to previously unanswered questions, for example how Ken ended up in Japan in the first place.

Stylistically they get everything right.

It seems like such an obvious formula: pick out the key characters that people who played the game found interesting, focus on their back story and pick out the meatiest parts, get the story right and tell it in an interesting way. It’s a far better idea than trying to somehow piece together the fabricated back-stories of sixteen unrelated characters for the completion’s sake. This way we are able to see some good acting breathe life into the characters for the first time. It’s not Oscar-winning acting, but it is as good as anything I’ve seen in a video-game-to-film release.

The original release was actually in the form of thirteen webisodes released via Machinima, which was later edited into a full film. Such was the popularity of this, there is a planned sequel that will focus on the シャドル / Shadaloo organisation, which is headed up by M. Bison and also includes the original remaining three final boss characters of Balrog, Vega and Sagat, and the characters in the original game series that had joined the fighting tournament to bring down the organisation (Guile, Chun Li, Cammy and T. Hawk). This has a lot of potential and could be as successful as long as they give the characters as much space to breathe as in this release. Clearly having eight stories to tell is more difficult than four, and the tone of the film would be a huge departure from Assassin’s Fist should this be the route down which they choose to go.

The entire film can be watched here below, though it is also available in HD on Netflix and is available on Blu-ray.

[1] The “cheaters never prosper” line was something the Amiga version threw at you if you keyed in a cheat for invincibility. You could sail through the game but when it got to the post-game conclusion story screens, you instead were treated to a screen reading “Congratulations, but as we all know, cheaters never prosper.” It was harsh but in a way taught us all a life lesson.

[2] Another thing that spoiled my enjoyment of the Amiga version of the Street Fighter II game was that when you loaded up either Ken or Chun Li, the top halves of their bodies were a scrambled mess of pixels. I never knew why this was the case.

[3] Super Street Fighter II: The New Challengers / スーパーストリートファイターⅡ -The New Challengers was released in 1994 and featured hugely enhanced graphics and four new characters: Cammy, T. Hawk, Deejay and Fei Long. Whilst it was a neat effect to bring in four new characters to milk the popularity of the existing franchise, anyone who regularly picked any of these four characters was generally treated with dismay in my group of friends. It’s a bit like saying your favourite Beatles album is “Band on the Run”.

[4] Bored of the relentless tweaking involved with each iteration of essentially the same game, we eventually tracked down a copy of the original Street Fighter on the Amiga. It featured Ryu, Ken and Sagat – all familiar – but also characters like Birdie, Adon and Gen. Inevitably none of these featured in the film. Obviously the feature film should have been called Street Fighter II: The Movie, or something similar.