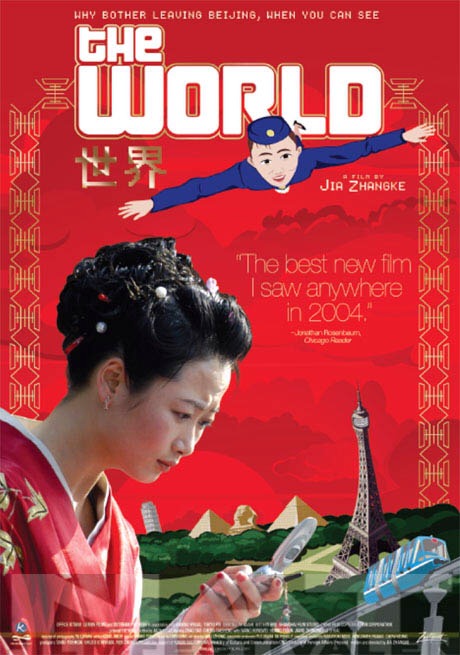 Time for another Masters of Cinema review, this time for Jia Zhangke’s 2004 Chinese film 世界 / The World. Originally screened in competition at the Venice Film Festival, it soon found its way onto the Eureka label on DVD and subsequently again on a Blu-ray/DVD dual-format release.

The story covers a short period of time of two workers at Beijing World Park: Tao (Zhao Tao) and Taisheng (Chen Taisheng) Tao’s boyfriend and a security guard at the park, whose relationship becomes increasingly strained throughout the period of the gloomy film. The theme park (a real park in Beijing) recreates famous cities and landmarks from around the world but in reduced scales, mainly for tourists. The story delves into the emotional and financial instability of the two lead characters and their colleagues, and how these two factors go closely hand-in-hand in modern China.

At 135 minutes long and with an extremely slow pace, The World is a tough film to sit through and maintain focus. The dialogue isn’t very focused, with the effect of making the characters feel wholly depressed. Unfortunately, whilst it’s fine to do this, when you’ve not really getting very far along the characters’ journeys your mind does start wonder. I had to take a couple of breaks to get through it, and that’s doesn’t really indicate a story that has me gripped.

There were some clever techniques utilised. Lead character Tao continually lost herself in her inner thoughts, removing herself from her own depression into a world represented by brightly coloured animation. This is something I saw more recently in Giovanni’s Island, probably to much better effect, but it doesn’t detract from the solid concept.

By the end of the film, I didn’t really feel emotionally involved in any of the characters and was quite relieved when it was all over. It’s not a film I will be revisiting any time soon.