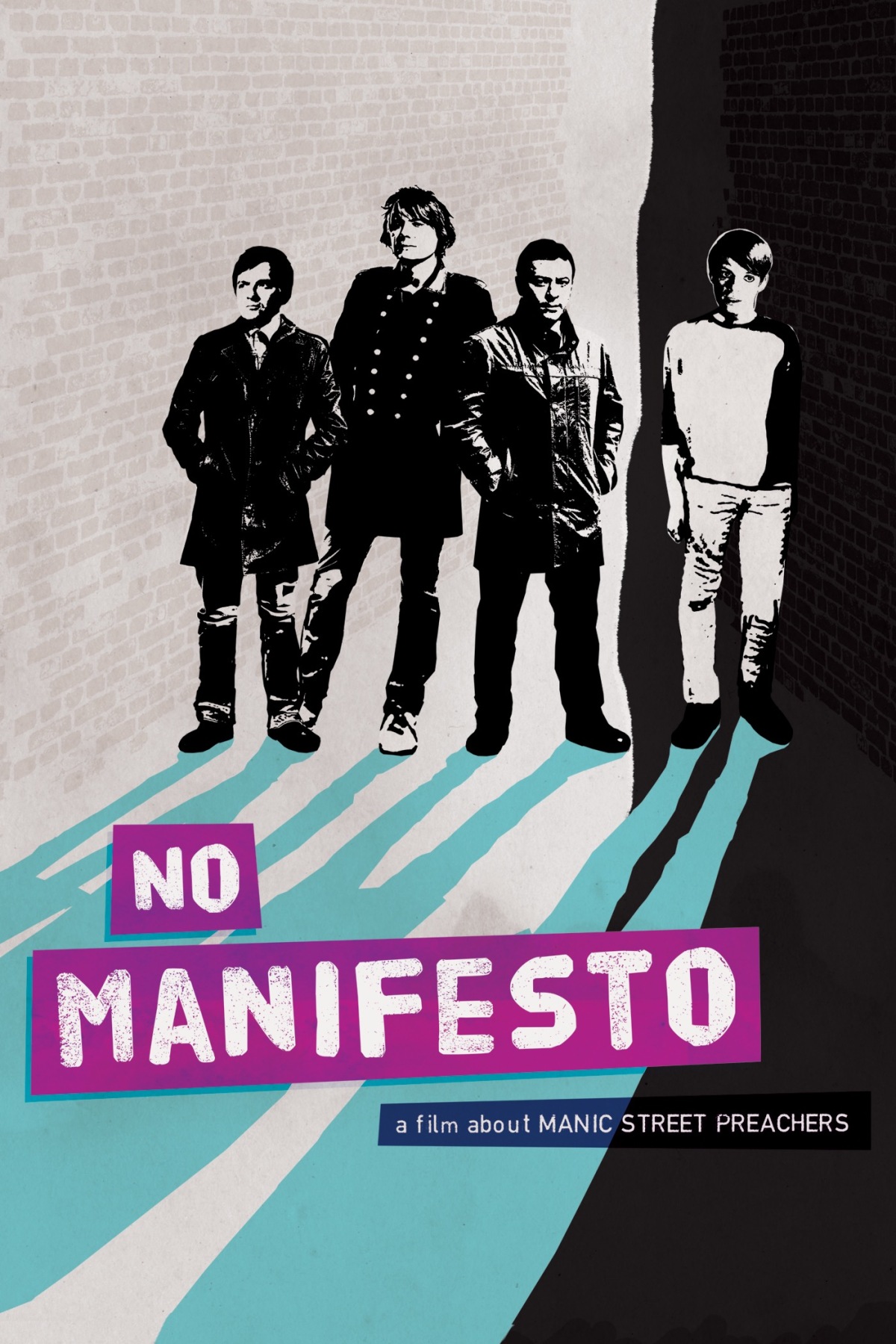 In 1991, Welsh band Manic Street Preachers arrived on the British music scene proclaiming their ambition to make one album, sell 16 million copies and then split up. 18 years, 9 studio albums, one missing member and many controversies later, they’re one of the UK’s most highly acclaimed bands. Narrated by their fans and featuring exclusive footage of recording sessions, live performances and interviews with the band combined with archival materials, No Manifesto takes an in-depth look at the Manics’ history and creative process and gives glimpses of the quirky and unique personalities that make up the band, as well as exploring the deep relationship between the band and their audience.

Inevitably when I sit down to watch a music documentary it’s going to be for a band that I already know and love. They can be a mixed affair. I recently reviewed the Elvis Costello documentary Mystery Dance and found it fascinating, full of information I wasn’t aware of. On the flip side, the Supergrass documentary Glange Fever is probably best avoided unless you’re a truly avid fan (which I am, so I loved it, but I can see a lot of people not doing so). So when I bought a ticket to a special screening of No Manifesto at Broadway Cinema in Nottingham, I fully expected a crowd full of die-hard fans eager to get a glimpse of the band behind the scenes. That panned out as expected and I think the crowd go what they wanted too. Sort of.

After so long on the music scene, the Manics have built up a close relationship with their fans. Riding the wave of Britpop despite not deliberately trying to be part of the movement (did anyone?), they stuck to their guns and kept releasing great album after great album. That hasn’t really been reflected in their album sales though, nor in the critics’ reaction to their output. As the film points out on several occasions they peaked commercially with This Is My Truth Tell Me Yours in 1998, though if you ask any avid Manics fans they were at their best in their first three albums before the mysterious disappearance of Richey Edwards.

The concept that their best work was in their early days is not something I totally agree with. I also class myself as an avid Manics fan but didn’t join the party until the Everything Must Go album, and I still hold that this is their greatest achievement as a band. Clearly this isn’t a common thought but it always baffles me as the album was so commercially and critically popular. Maybe I’m missing something.

Indeed, you only have to listen to their last couple of albums to realise that they truly haven’t slowed down at all, with a host of big hit singles saturating the radio each time. Show Me The Wonder, It’s Not War (Just The End Of Love) and Anthem For A Lost Cause, rather than standout tracks, are all just a fair representation of the quality waiting to be found within the album should you want to find it. They pretty much sell out their tours every time and their live shows are still full of energy. They truly are something special.

So what does the film bring to the table that we don’t already know? Director Elizabeth Marcus and producer Kurt Engfehr are both from North America, a place where the Manics never quite made it (for several unfortunate reasons). As the film played out and the message was consistently negative about the Manics’ achievements post-millennium, I found myself agreeing less and less with what they were saying. However, I came to realise that it was a truthful depiction of how the Manics are perceived, just in North America.

The film, for which over 100 hours of footage was filmed (“you never know what footage you need”), covers the band from 2005 in the run up to the release of the commercially viable Send Away The Tigers through to the 2009 release of Journal For Plague Lovers, the album that utilised the last lyrics written by Richey. This subject matter understandably gets a decent amount of coverage as it was such a pressing matter in the build up to their 2009 release, though it wasn’t lingered on too much.

Marcus, discussing the film after the screening, said “most press, books and TV treated the band like Richey is the only interesting thing about them. I felt they deserved more credit, both as a band and as people. They had to deal with personal loss and they had to do it in the public eye. They dealt with it with such grace and patience and I wanted them to have more attention.” I agree with this to some extent, but I don’t personally believe that they are solely associated with Richey’s disappearance. Certainly not in the UK. Most bands go through a trajectory of popularity where they have a peak of popularity somewhere between their first and third album, then continually decline from there and end up either breaking up or continuing with a reduced but hardcore fanbase. Clearly the Manics are in the latter category, but have a huge fanbase that support them with every album they release. There’s nothing wrong with that, and nothing abnormal about it. It doesn’t mean they’re really unpopular, just that they aren’t seen in the same light as when they broke through almost 25 years ago.

It wasn’t a conscious decision to take so long to produce the final product, but evidently the delay of five years from completing filming to releasing the final product is going to have an adverse effect on the success of the film. As an independently produced film it was always bound to take longer to get over the line. Actually, they had to take several breaks to earn the money to get to the next stage of the project. I hope this delay won’t mean it is a financial failure as the director and producer deserve more.

For me, the film didn’t have any surprise revelations and as such is telling a story that the target audience already knows, albeit from an unusual point of view. It is a good document of a great band, and will probably be looked back on as an important piece of work for people who become fans through word of mouth some years down the line. For now it’s simply a nice-to-have film for the already converted.

No Manifesto is available to buy now on Blu-Ray and DVD.