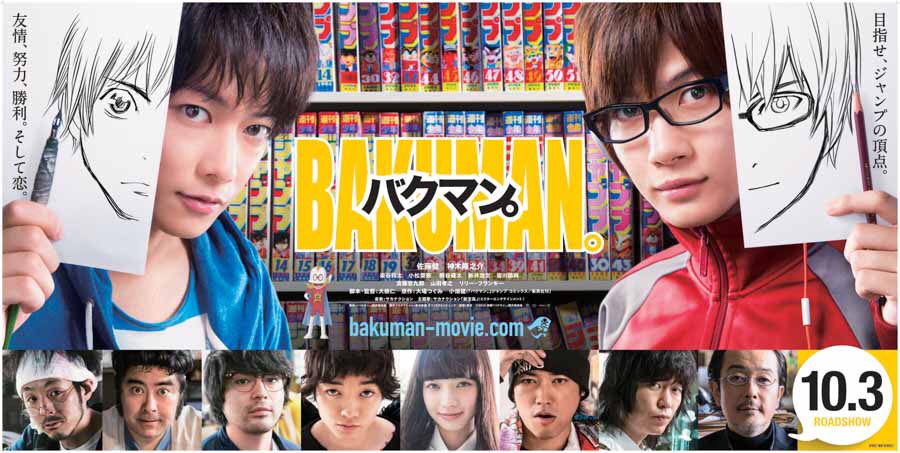 バクマン。/ Bakuman is a 2015 Japanese film based on a serialised manga of the same name. It depicts the exploits of two Japanese junior high school students, budding artist Mashiro (Takeru Satô) and aspiring writer Takagi (Ryûnosuke Kamiki), as they form a partnership to become mangakas for Japan’s most popular weekly Manga magazine Shonen Jump.

The film, like the manga on which it is based, is laced with introspection. The subject matter is such that the original manga was about two boys wanting to write for Shonen Jump, though it was serialised in that very magazine. The risk therefore is that it could have romanticised working there, but that couldn’t be further from the truth. Conversely, I was wondering how they ever got it signed off by Shonen Jump since working there seems to pose serious risks to ones health.

The overarching storyline is a romantic-comedy, because artist Mashiro is driven by the hope his success will be met with that of Azuki (Nana Komatsu), an aspiring voiceover actress with whom he has a pact should they both be successful. Whilst this is slightly by the numbers, the real magic comes from the attention given to the artistry and skill involved with making manga. I’d go as far as saying this is a perfect place to start if this is a career you want to go down as it gives you a warts-and-all depiction of how these artists live their lives.

There are some brilliant sequences involving the main characters as they battle against a rival artist in a nightmare world of manga artwork and paintbrushes that do for Japanese art what Scott Pilgrim did for videogame culture in 2010.

There might not be a lot in this for people who aren’t fans of manga or anime, but anyone who has ever picked up a copy of Shonen Jump would really find a lot on offer in this homage to the struggling manga artists at the magazine.